Cardano smart contracts upgrade is almost upon us. With just three days left, there is a lot of speculation as to what the price of the digital asset will do until then. The weeks leading up to the launch have seen the asset hit multiple new all-time highs. That is until the crash that rocked the market on September 7th. Cardano suffered an 18% flash crash that saw it lose most of its gains for the previous weeks.

Now, with the market still reeling from the crash, the digital asset has begun to regain some of the lost value. But at a much slower pace. One news that has helped to hold the price up has been the confirmation of the Alonzo Hard Fork that had been scheduled for September 12th. Developer IOHK posted on their Twitter that the project was all set for the mainnet upgrade.

But as the date draws closer, the reality of what the upgrade might do for the price of ADA looms over the community. Most maintain a positive outlook for the coming upgrade. Others, on the other hand, believe that this will trigger a “sell the news” event.

Are Investors Planning To Dump Their Cardano Bags?

Historically, with important upgrades like these, there have been instances where investors piled up their bags in anticipation of a big reveal and then promptly dumping their holdings with the release. This happens not only in the crypto market. Financial markets are notorious for events like these. Hence the existence of the phrase “sell the news”.

A good indicator of investors’ attitude towards dumping is market sentiment. Currently, the overall market sentiment has moved into the negative. The Fear & Greed Index shows that the market came out of “Extreme Greed” at the start of the week and lost over 30 points to move into the “Fear” territory. This indicates that investors are more likely to sell their holdings than buy. 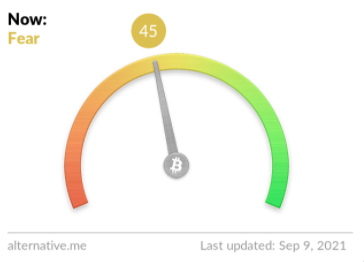 All of the hype leading up to the launch of the upgrade had fueled the rally that led to the new all-time highs. But with current sentiment and market correction only just beginning, a more conservative approach from investors can be expected on September 12th. Although, an uptick in the price can be expected once traffic picks up on the network, which would require ADA tokens to carry out activities like interacting with decentralized finance (DeFi) protocols and minting NFTs.

As of the time of writing, ADA price has seen some recovery that moved it out of the $2.4 territory to its current trading price of $2.59, with a 24-hour price change of 8.52%. Cardano still maintains its number 3 position on the top 10 cryptocurrencies by market cap with a current market cap of $82 billion.