Digitalization allows people to optimize and accelerate many processes. For example, we have messengers for rapid communications and electronic wallets to make quick payments for goods and services.

Unfortunately, most services require separate applications that clog up device memory and create confusion. The developers at XQR have found a solution to this problem. We suggest you take a closer look at this startup project, which many call a multifunctional social network of the future.

XQR’s developers position the project as a social network with advanced functionality that covers several user needs at once. For example, each account can be considered an information center for a particular person or company, and the platform itself can be considered a place to communicate, find goods and services, and establish business contacts.

Among other things, XQR allows you to earn money. The developers have created a number of monetization tools that ensure users can make a profit. For example, you can mine cryptocurrency on the platform and earn income for attracting new users.

Since there are no similar products on the market, the concept for XQR may seem complicated. In fact, on closer inspection, the multifunctional platform looks like a simple, logically verified set of technical innovations. We suggest that you delve deeper into how this project works.

XQR as a Universal Calling Card

The platform invites everyone to create a page that can be considered a personal information center. The interface for an XQR user account consists of a number of sections, including the following:

Interesting! Through XQR, you can share contacts even without a network connection. When scanning a QR code, a phone automatically adds the user to its address book. 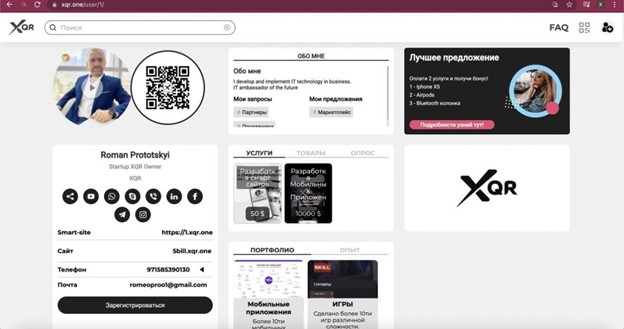 Important! A personal page in XQR is comparable to having your own website. A person doesn’t need to download the platform’s mobile application to access it. The page will automatically open in a phone’s browser when the user’s QR code is scanned.

The platform has a search field that makes it easy to find company representatives, specialists in a certain profession, and so on.

As of the end of June 2021, 3,000 users were registered on XQR. The service’s main features are available for free.

A Glance at the Technical Side of the Project

XQR is a modular project. It consists of a number of products that form the platform’s ecosystem.
Here are some XQR modules:

In the future, the developers plan to add other modules that will expand the project’s ecosystem. As a result, XQR will become a universal platform where users can find everything from taxi services to investors for their startup.

How do you mine cryptocurrency through XQR?

Users can get started earning cryptocurrency on XQR without any special knowledge or skills.

Bitcoin (BTC) mining is available on XQR. In the future, users will also be able to mine the project’s 5BILL token. You’ll find out more about XQR’s native cryptocurrency later in this review.

You can receive tokens in the games presented on the platform or by completing small tasks. For example, the platform will pay crypto coins for inviting new users to XQR.

Interesting! Earning cryptocurrency in this way cannot technically be called ‘mining’ in the traditional sense. That process usually involves making a device’s computing power available to a digital asset’s network.

Mining on XQR more closely resembles the distribution of cryptocurrency on platforms called ‘faucets’, in which users can receive coins for completing simple tasks.

Why does XQR need an internal token?

Having its own cryptocurrency has made it possible for XQR to unify the project’s financial system by linking its individual products. Instead of various currencies, the developers offer users a universal tool – the 5Bill token. With its help, the project plans to reward users in many different ways.

We’ve already mentioned that XQR’s system will transfer cashback to users for purchases made in its marketplace and pay them for attracting new users. With the help of the token, other actions will be monetized in the future. For example, users of XQR’s social network will be able to encourage other users with small payments.

The creator of the project is a cyber security specialist named Roman Prototsky, who has devoted the last 12 years of his life to the IT field. The developer had his own studio, where he created custom-made mobile applications, websites, games, Telegram bots, and various services. 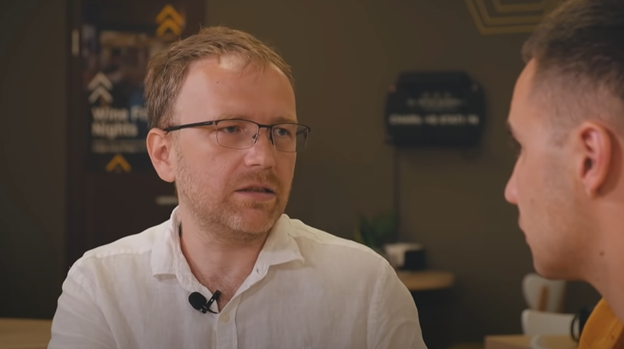 Roman Prototsky. A screenshot from a video about the XQR project from the UkrInvestClub YouTube channel

Roman Prototsky’s many years of experience in development helped him create his own high-tech project that meets the requirements of modern users.

He began working on XQR in 2019. A development team helps him in creating the project.

Who can the project be useful for?

XQR is a multifunctional project. We suggest you consider the basic ways of using the platform:

The referral program and other earning opportunities, including mining functionality, makes it possible to consider the project a source of income.

How do you register on XQR?

To register on the platform, it is enough to specify a mobile phone number, come up with a password, and confirm the creation of the account by entering a code that the system will send you in an SMS.

The developers have posted detailed instructions on the project’s YouTube channel:

The XQR platform is also available for Android and iOS users.

Why is XQR better than other social networks?

XQR’s developers have decided to take all the best tools from the world of digital technology and combine them in one universal platform. As of the end of June 2021, the platform is still being refined, but its basic modules are already fully functioning.

XQR makes it possible to significantly simplify business communications and many other processes, as well as search for people and products. Given the accelerating pace of life, the project’s features look especially relevant today.