Bitcoin’s amazing run of form these past couple of weeks is forcing the crypto skeptics to think again.

Today sees a sell-off to $17.9k at the time of writing. However, with BTC rallying 150% since the start of 2020, many analysts believing it’s just a matter of time before Bitcoin cracks its previous all-time high.

In fact, with the renewed optimism comes a slew of outlandish price predictions. It’s a given that John McAfee’s end of 2020 $1 million valuation likely won’t happen. But Citibank recently came out predicting a $318k Bitcoin price by the end of 2021.

On that, Bitcoin bull Max Keiser spoke about the absurdity of “moon math.” But at the same time, he didn’t discount the possibility of such moon valuations coming true. That’s because, ultimately, he believes there is no ceiling on the price of Bitcoin.

“But none of them are going to capture the ultimate bull market number because remember, bitcoin has no top because fiat money has no bottom.“

And with so much positive sentiment surrounding Bitcoin today, the mainstream media is starting to pay attention to it once more.

But the mainstream media, in general, has always had an uneasy relationship with the cryptocurrency. Is that about the change from here on out?

Since then, news stories mentioning Bitcoin have struck a year to date high. 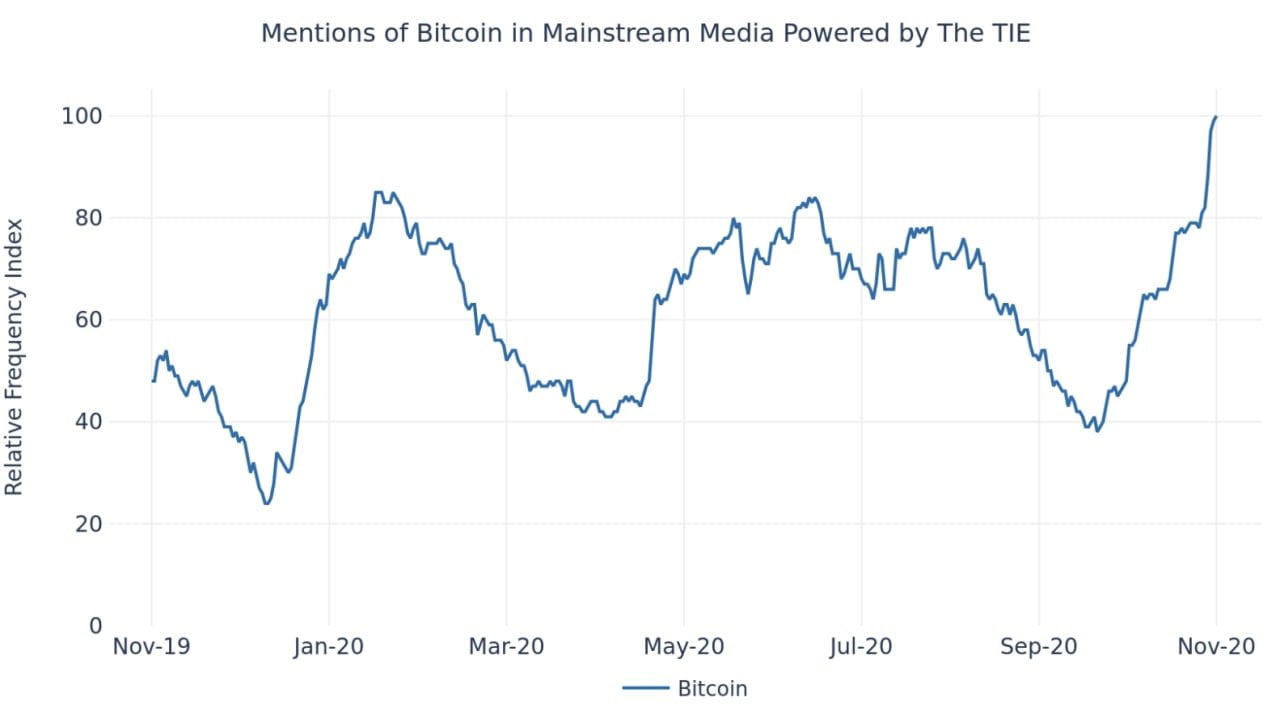 “While a lot of scepticism still surrounds cryptocurrencies, some in the investment community appear to have warmed to them.”

The Guardian, which is typically indifferent when it comes to cryptocurrency, also mentioned Bitcoin’s stellar run of form recently.

Much like Yahoo Finance, the article also included a quote in which an industry expert spoke about changing attitudes towards the number one cryptocurrency. JPMorgan analyst Nikolaos Panigirtzoglou said:

And so, it seems as though this fake internet money, used by darknet criminals, is finally beginning to garner fair treatment in mainstream media circles.

You could argue that this wouldn’t be the case without the ongoing panic situation. But wasn’t Bitcoin developed as a solution to crises?

In any case, it’s expected that a softer mainstream media stance will trickle down, resulting in greater acceptance of cryptocurrency in the eyes of the general public.

While we are far from actualizing that state, the process has already begun.