The long-awaited release of ETH 2.0 has had the Ethereum community in a state of expectancy for well over a year at this point. Originally, developers had set a January 2020 release date. But that date has come and gone with only more news of further delays since then.It follows that during the Consensus: Distributed conference, which is taking place virtually between May 11 – 15, Ethereum co-founder, Vitalik Buterin apparently confirmed the project is on track for July 2020 launch. However, in an unexpected twist, Buterin has since backpedaled on the release date. 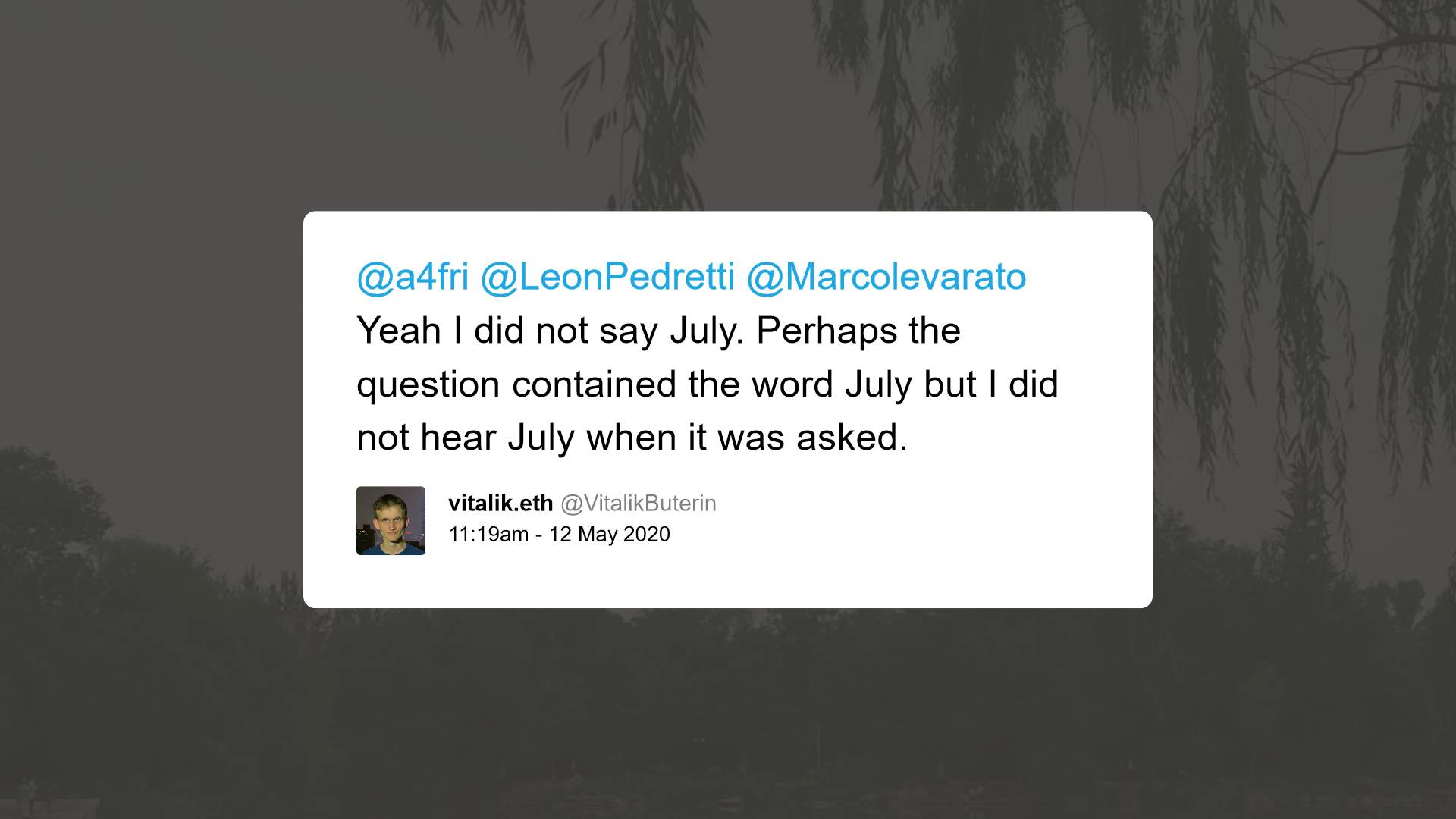 Source: twitter.comIn a tweet, Buterin claims to have misheard the question and then confirmed ETH 2.0 will not be ready for July. This disappointing turn of events has been met with FUD from the Ethereum community. With some even claiming that it’s unlikely ETH 2.0 will launch this year.I can now officially confirm that ETH 2.0 won’t launch by July.Stay tuned for official confirmation that it won’t launch by July 2021 either!— Udi Wertheimer (@udiWertheimer) May 12, 2020Ethereum 2.0 Still in Phase 0 of 4 Phase RoadmapSince Ethereum launched in mid-2015, it’s core developers have been playing catch up. ETH 2.0, with significant upgrades to scaling, as well as implementing a Proof-of-Stake model, intended to address these concerns.Regular updates show development is taking shape. For example, in late April, Ethereum developer, Eric Connor tweeted an update on how the ETH 2.0 testnet is progressing, as well as linking the Github update.“The first phase of Ethereum 2.0, the phase 0, is the beacon chain. For the first time, a variety of new clients will be working together on a brand new blockchain with a new, unique approach to networking and consensus.”To which the Schlesi testnet, as it’s been dubbed, currently has two clients: Lighthouse from Sigma Prime and Prysm from Prysmatic Labs.Eth2 multi-client testnet is up and running. So far, Prysm and Lighthouse have joined.https://t.co/h8xNwSjpyc— eric.eth (@econoar) April 27, 2020But a look at the May 2019 dated roadmap shows just how far behind current development is from original expectations. According to the roadmap below, phase 0, Beacon Chain was set for completion by the end of 2019. Yet almost halfway into 2020 and there is no sign of this happening soon.Source: media.consensys.netThe Beacon Chain phase relates to the switch from Proof-of-Work to Proof-of-Stake. Developers, Consensys state that both PoW and PoS chains will run alongside each other during this development phase. This will ensure continuity of the chains until some time when the PoW chain is switched off.“The Beacon Chain is a Proof of Stake blockchain and will mark the execution of the long-planned switched from proof of work to proof of stake consensus mechanism.”The Competition Heats upThe hold-ups to Eth 2.0 have many wondering if the Ethereum core developers can deliver at all. This is especially applicable considering the sheer number of “Ethereum-killers” gunning to take their crown.With that, Charles Hoskinson recently compared Cardano to Ethereum by saying:“Contrast that with Cardano, where we brought scientists together and we follow the peer review process, and we systematically wrote paper after paper, and those papers went through peer review and we slowly built up the entire theory of Proof-of-Stake to a point where we felt comfortable and then we started talking about it.”What’s more, Hoskinson further contrasted the projects by saying Cardano’s ground-up foundations have set the project in good stead. Whereas Ethereum is greatly hindered by tacking development onto a pre-existing code that is already outdated.