Although Bitcoin has erupted over the past 24 hours, XRP has remained muted. The top altcoin is up 1% in the past 24 hours while BTC has surged 8% higher, failing to react to Bitcoin breaking past $10,000.This price action has convinced analysts that XRP is poised to retrace, in spite of the influx of capital rushing into the cryptocurrency market.XRP Preparing to Tumble, Analyst FearsSomehow, XRP is actually trading a handful of percentage points lower than it did at the end of April, despite Bitcoin gaining 10% since then.This underperformance has a top crypto trader fearing XRP has a high chance of pulling back. The trader illustrated this in the chart below, which shows that XRP is trading in a textbook descending triangle.Descending triangles are marked by a series of lower highs a series of equal lows, then often, a strong break to the downside. In this case, should XRP’s descending triangle fail, the trader is charting a 15% drop to $0.177. 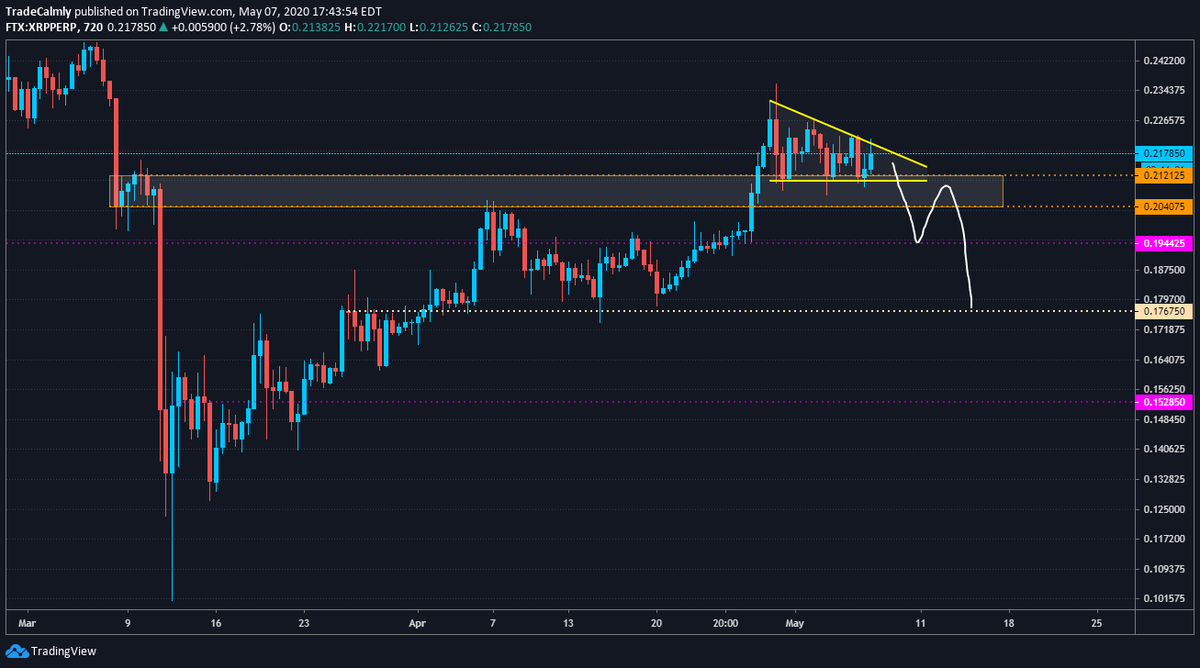 Chart from @im_calmly (Twitter)The bearish sentiment on XRP has been shared by other traders.On XRP’s performance against Bitcoin, Peter Brandt, commodities and asset trader since 1980 and a technical analysis author, commented:“This chart tells me the bag holders (who need to dump > 40 Bil XRPs) are supporting XRP/BTC at .000023 to .000024 as a desperate last stand. Sellers more aggressive since Oct ’19 If the bag holders back away, look for decline to .000011,” Brandt wrote, referencing the near loss of support in the chart depicted below.Chart from Peter BrandtThis sentiment was echoed by Josh Olszewicz, a crypto analyst at Brave New Coin, who shared that XRP’s on-chain outlook is far from positive.Both average transaction volumes and the number of active addresses on the XRP ledger have decreased since 2018’s highs. Simultaneously, XRP’s NVT, a ratio used to determine the economic activity of a network, has trended lower.Bitcoin’s Relative Strength Adds Credence to the RallyAlthough XRP retracing as Bitcoin rockets higher may hurt the altcoin’s holders, it may be a good thing for the broader crypto market.As an analyst pointed out, during BTC’s rally to and past the key $9,000 resistance level, there was a “marked decoupling between Bitcoin and altcoins in the last week as we move into the halving.”