Bitcoin has been on a remarkable rally over the past few weeks. The asset has mounted past resistance level after resistance level, recently crossing $9,000.Market cynics have said that BTC’s recent inability to surmount the key $9,500 resistance is indicative of a top. Though analysts are starting to agree that there’s a growing converge of positive signs for Bitcoin.Related Reading: A Massive VC Just Raised $500M to Back Crypto: Here’s Why It’s ImportantBitcoin Flashes Flurry of Positive Signs on Weekly ChartThe strong recovery in the price of BTC since March’s $3,700 lows has allowed it to print a number of bullish signs. One top trader identified some of these signs on a weekly time frame, and they are as follows:The Moving Average Convergence Divergence (MACD) has seen a bullish cross. As reported by NewsBTC, in 2017  the indicator flipped green at $2,000 to mark the start of a 1,000% rally to $20,000. And at the start of 2019, Bitcoin rallied 300% when the indicator trended green in January.The Parabolic Stop-And-Run indicator has printed a “buy.” As reported by NewsBTC, every time this signal was seen in the past five years, the cryptocurrency has seen “significant” upside, as put by Nunya Bizniz.Bitcoin has recently crossed above three key averages: the 50-week, 100-week, and 200-week simple moving averages. The latter level is a crucial historical support, making the reclamation that much more bullish. 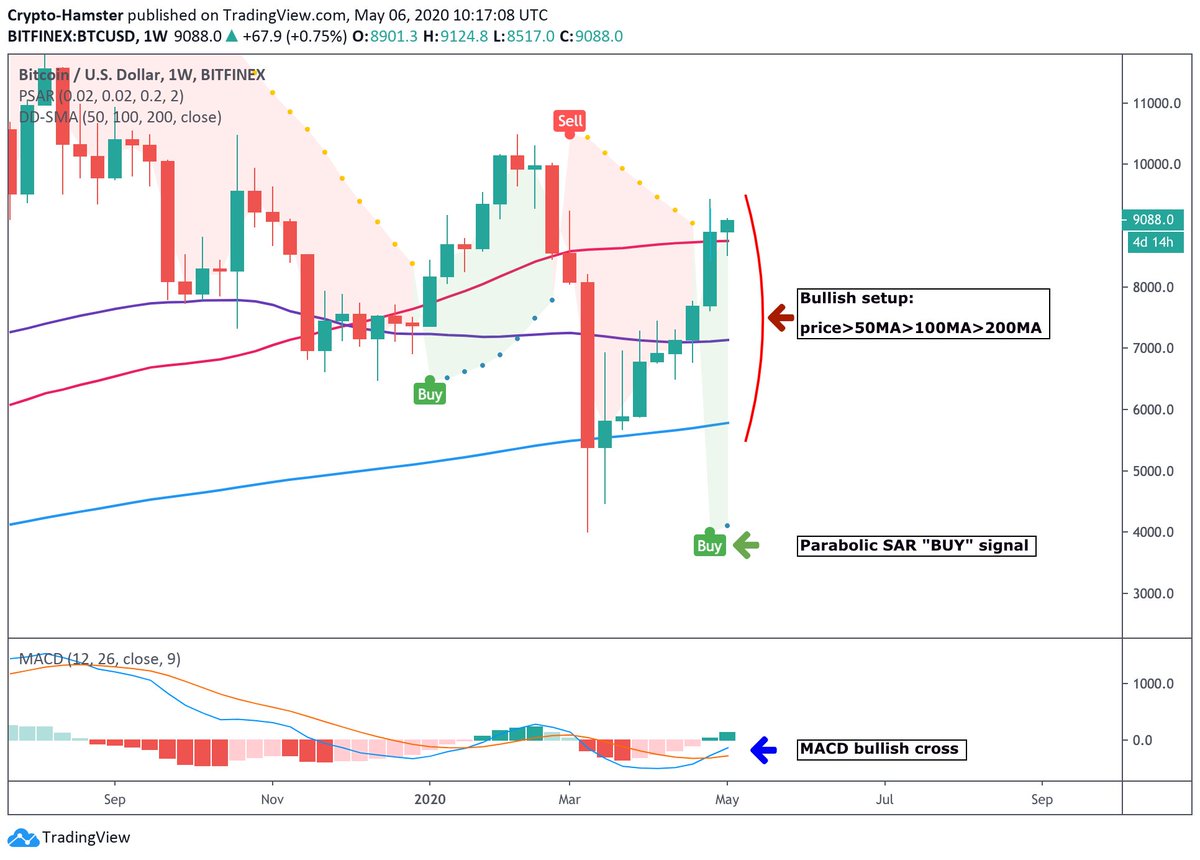 Chart from @CryptoHamsterIO (Twitter)Also on a weekly time scale, Coindesk market analyst Zack Voell noted that Bitcoin on Sunday night closed its seventh consecutive week of gains, something not seen since April 2019, when the last bear market ended.Chart from Zack VoellThis would suggest that should history repeat itself, the cryptocurrency is on the verge of yet another bull run. With Bitcoin being a market based on reflexivity (meaning momentum), this makes sense.Add Bullish Fundamentals to the MixAlongside these positive technical trends are fundamental events that could catalyze Bitcoin growth.The Federal Reserve just committed to even more money printing in the weeks ahead.In a statement last Wednesday, Jerome Powell, Chairman of the Federal Reserve, warned that the U.S. economy is currently in its worst rut in history due to the outbreak of COVID-19:“We are going to see economic data for the second quarter that is worse than any data we have seen for the economy. There are direct consequences of the disease and measures we are taking to protect ourselves from it.”Powell said that to respond to this, the Federal Reserve will continue to commit to low interest rates, capital facilities for companies, and other liquidity injections.Also, Bitcoin’s block reward halving is taking place in under seven days, which analysts say will cause the price of the cryptocurrency to rise should demand remain consistent or grow.Photo by laurent DE BRITO on Unsplash