Bitcoin price (BTC) failed to ignite much interest as October closed.  There are approximately 194 days left until the next Bitcoin halving, which probably feels like an eternity away for those involved with the crypto space.

This week there was also a surplus of negative news events like the Bitmex email leak and the Coinbase flash crash that caused mass liquidations on Deribit. So can we really expect Bitcoin price to do anything spectacular in the short term? 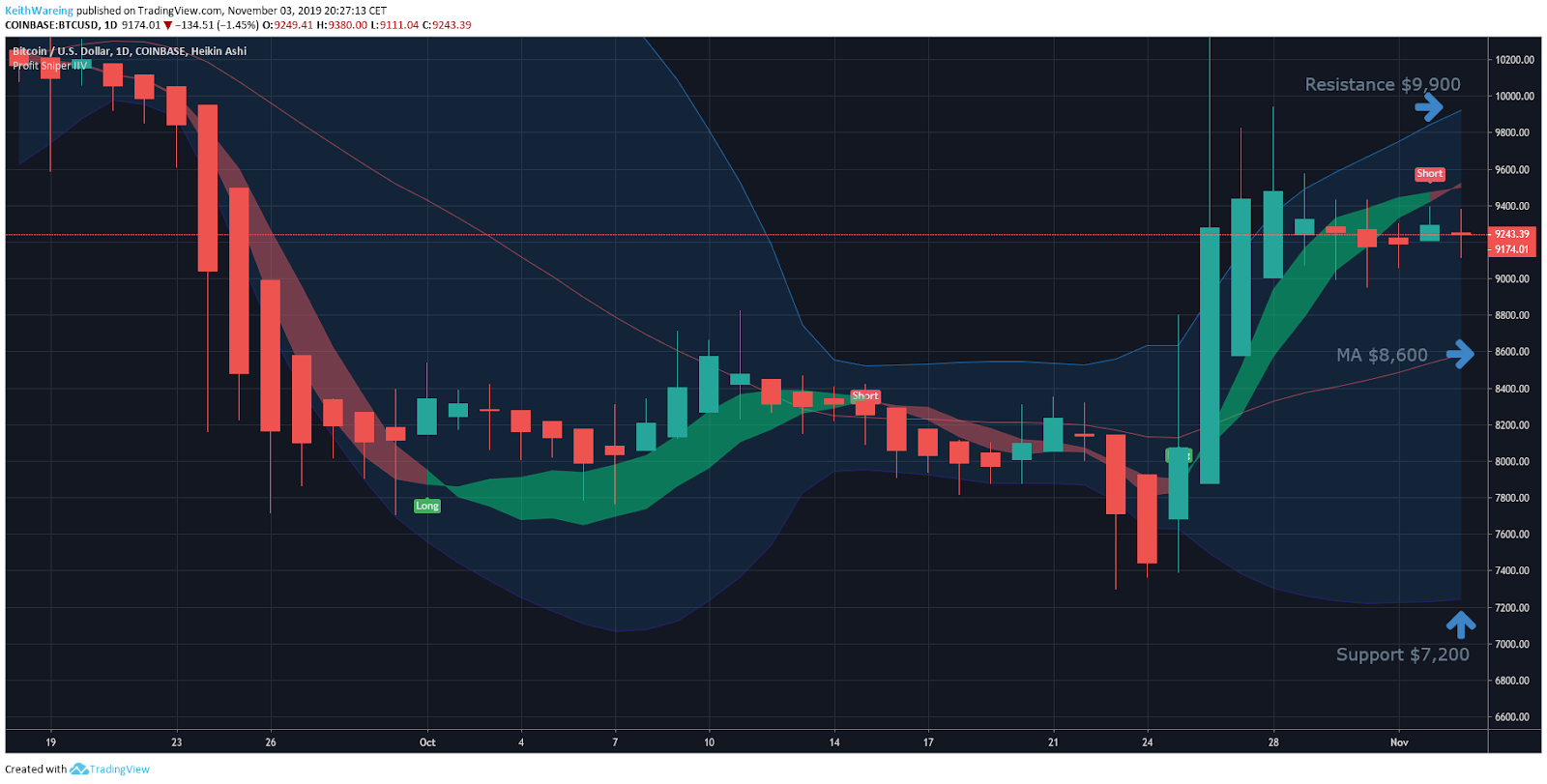 Bitcoin price has been locked in a tight range around $9,100 – $9,400 for the last 5 days.  However, since the massive move 2 weeks ago, the Bollinger Bands (BB) indicator has opened up revealing quite a broad range of support and resistance.

But what does the week ahead hold? Well, let’s first take a look at the first major bullish signal for Bitcoin that came on Nov. 1 when a new green monthly candle was printed. 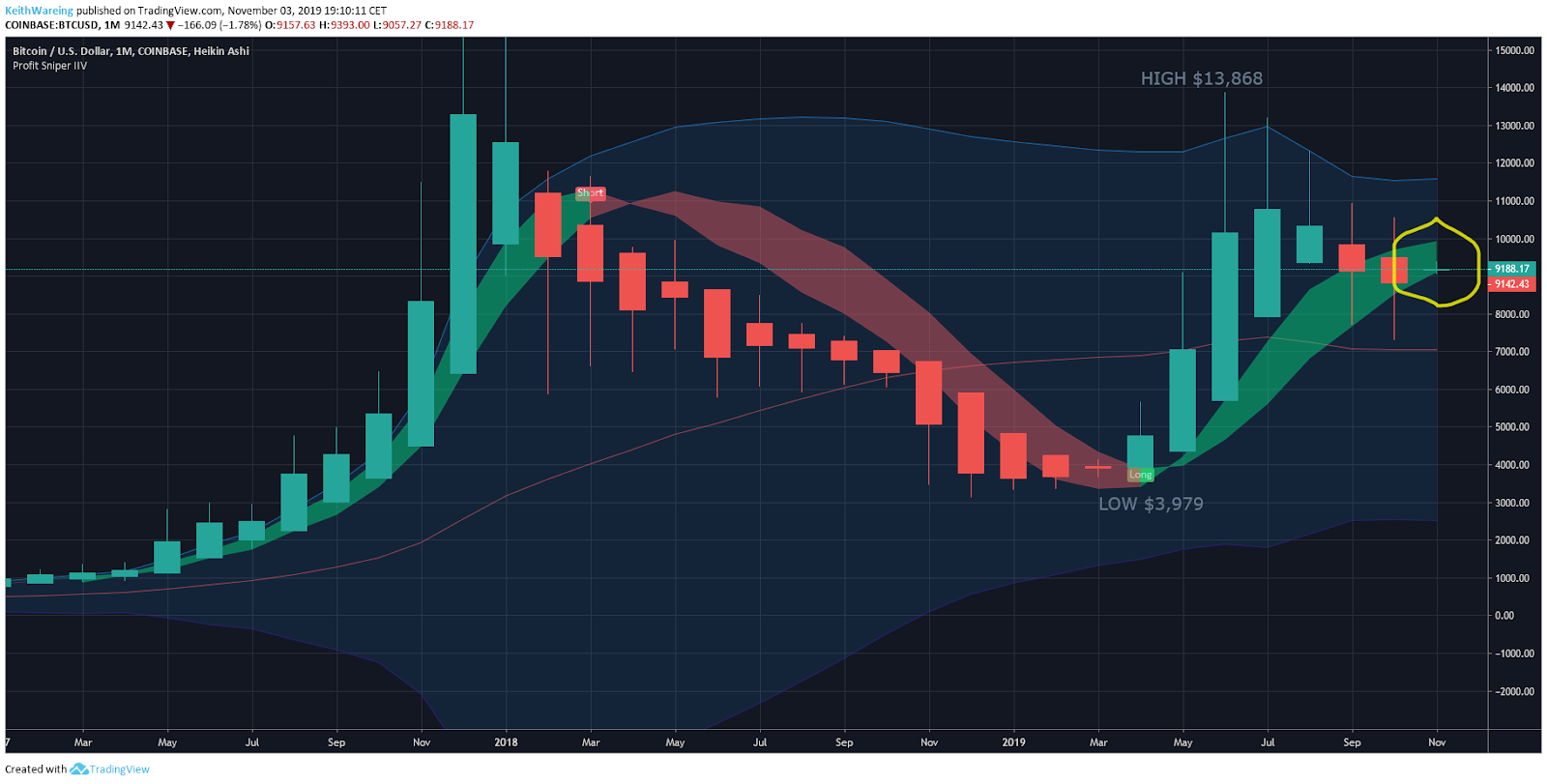 Let’s not underestimate the significance of this particular signal. The last time that the Heikin Ashi candles transitioned from red to green on the Bitcoin monthly chart was on April 1st, 2019.

Whilst it’s still early days, as each week progresses Bitcoin is slowly showing more bullish signs, and if history were to repeat itself we could be instore for 29% weekly growth as we head into the new year. But what other signs are there?

Is the weekly MACD turning bullish? 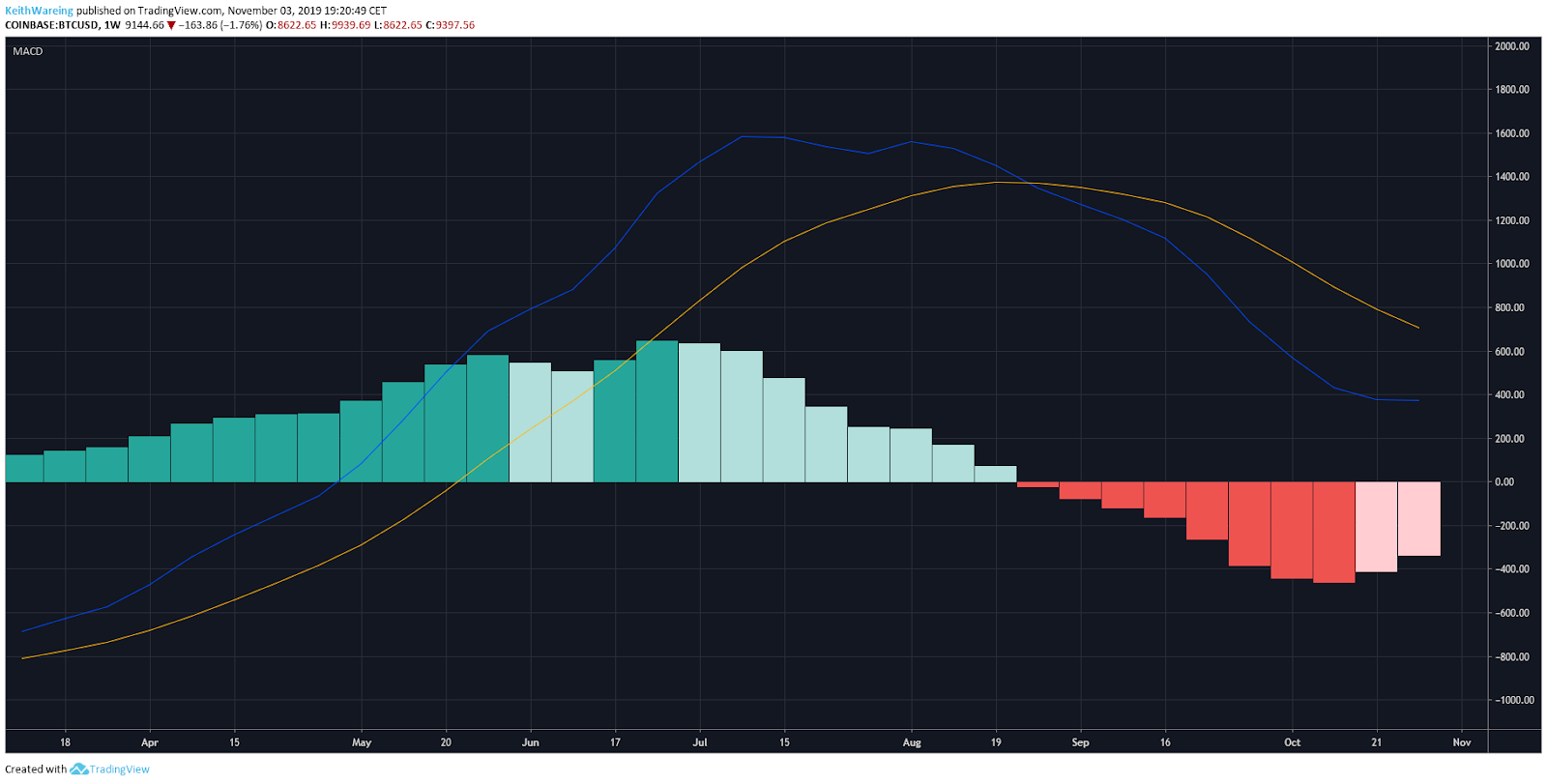 The weekly chart for Bitcoin has some golden nuggets starting to appear but they are not quite there yet. Using the Moving Average Divergence Convergence (MACD) we can see that the MACD line is beginning to gear up for a bullish cross, and for the past 2 weeks, the red candles on the histogram have been getting weaker.

This is a telltale sign that Bitcoin is due to enter its next bullish phase in the coming weeks. How long this will take depends on a multitude of factors, but one such place to look is on the Relative Strength Index (RSI) indicator to see if Bitcoin is oversold yet.

The weekly RSI is not showing any signs of life 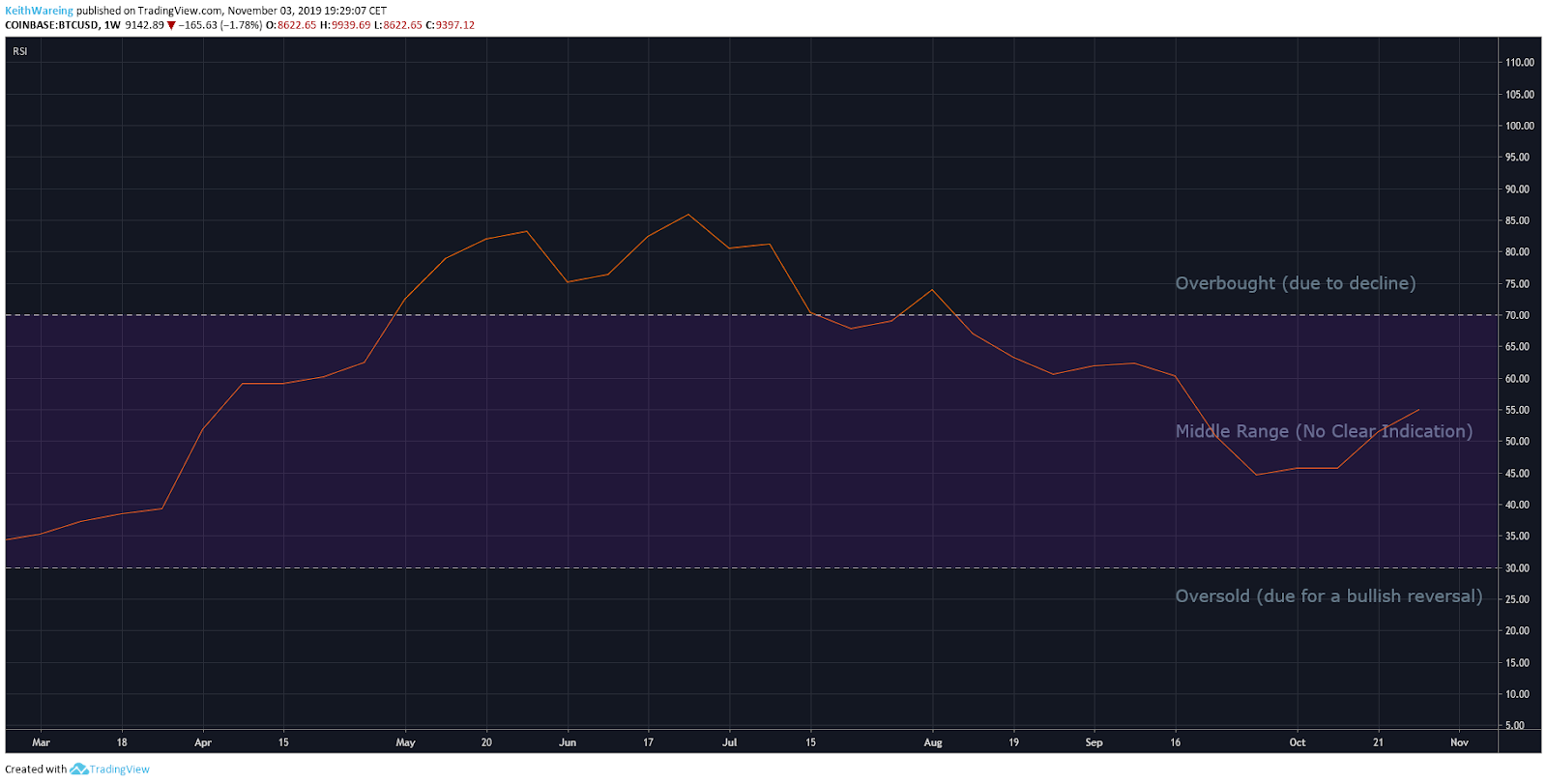 Currently, the RSI on the weekly timeframe is planted in a no-trade zone. Whilst this does not necessarily mean that Bitcoin price will not increase this week, this particular indicator isn’t giving off a strong buy or sell signal.

The RSI is currently reading 54.99 after bouncing up from 45 over the last few weeks. It could be that we have already witnessed a reversal and Bitcoin price could begin to rise, but history tells us that there is probably some more downward movement ahead of us before we start to see sustainable weekly gains. 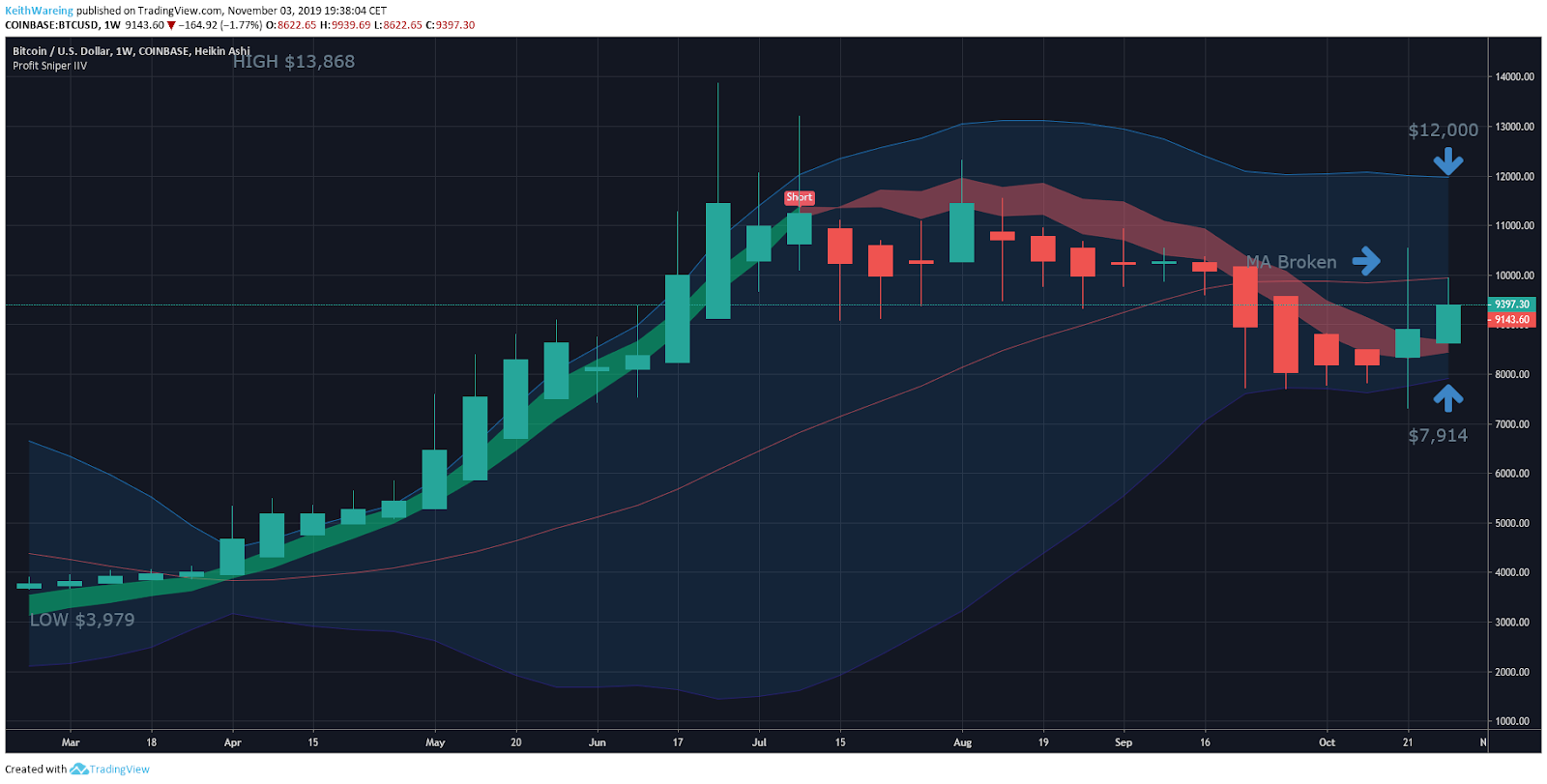 The massive spike that occurred two weeks ago did cause Bitcoin’s price to break the moving average (MA) on the Bollinger Bands (BB) Indicator. One can normally expect the price to then form new support above the MA.

This hasn’t yet happened, and at the time of writing the moving average is around $9,945 whilst Bitcoin price is currently $9,148. Given the visible momentum from the candles on the weekly chart, it is not unreasonable to expect Bitcoin price to close over $10,000 before the end of the coming week if the bulls have their say.

If Bitcoin price can achieve this growth, then this puts $12,000 as the next level of resistance. On the downside, however, the support is still around $7,914 so the coming week could hold lots of surprises for both the bulls and bears amongst us.

Is Litecoin poised for 42% gains? 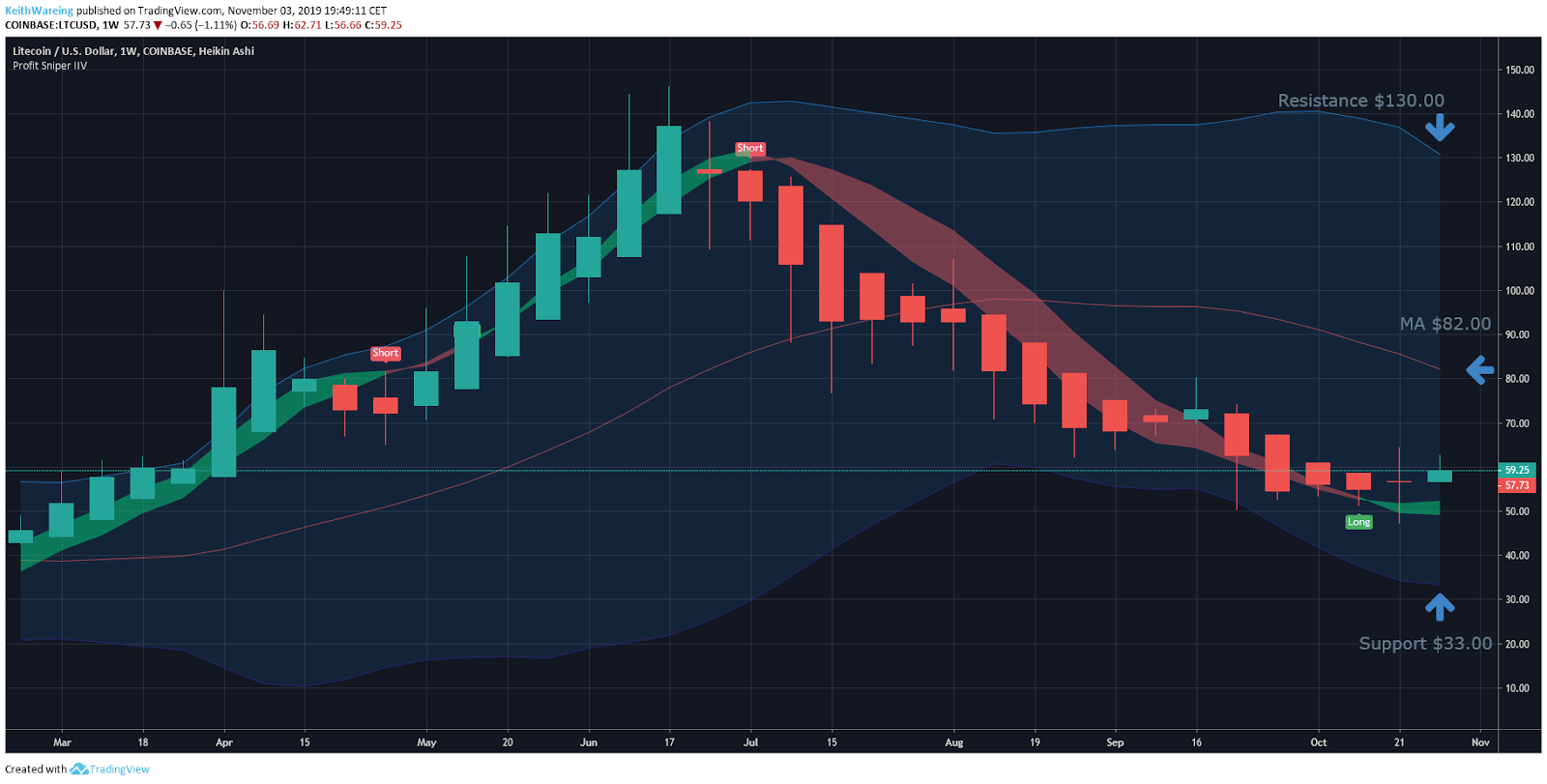 There are a few reasons to focus on Litecoin (LTC). Using the same analysis on Bitcoin, the weekly positioning looks like a stronger buy on Litecoin than is does on Bitcoin.

Litecoin price seemed to have found support two weeks ago around $47 and at the time of writing the LTC/USD pair is at $57. Using the moving average on the Bollinger Bands indicator to gauge the next level of resistance shows that Litecoin looks ripe for a move up to $82 before being rejected, which would represent growth of 42% 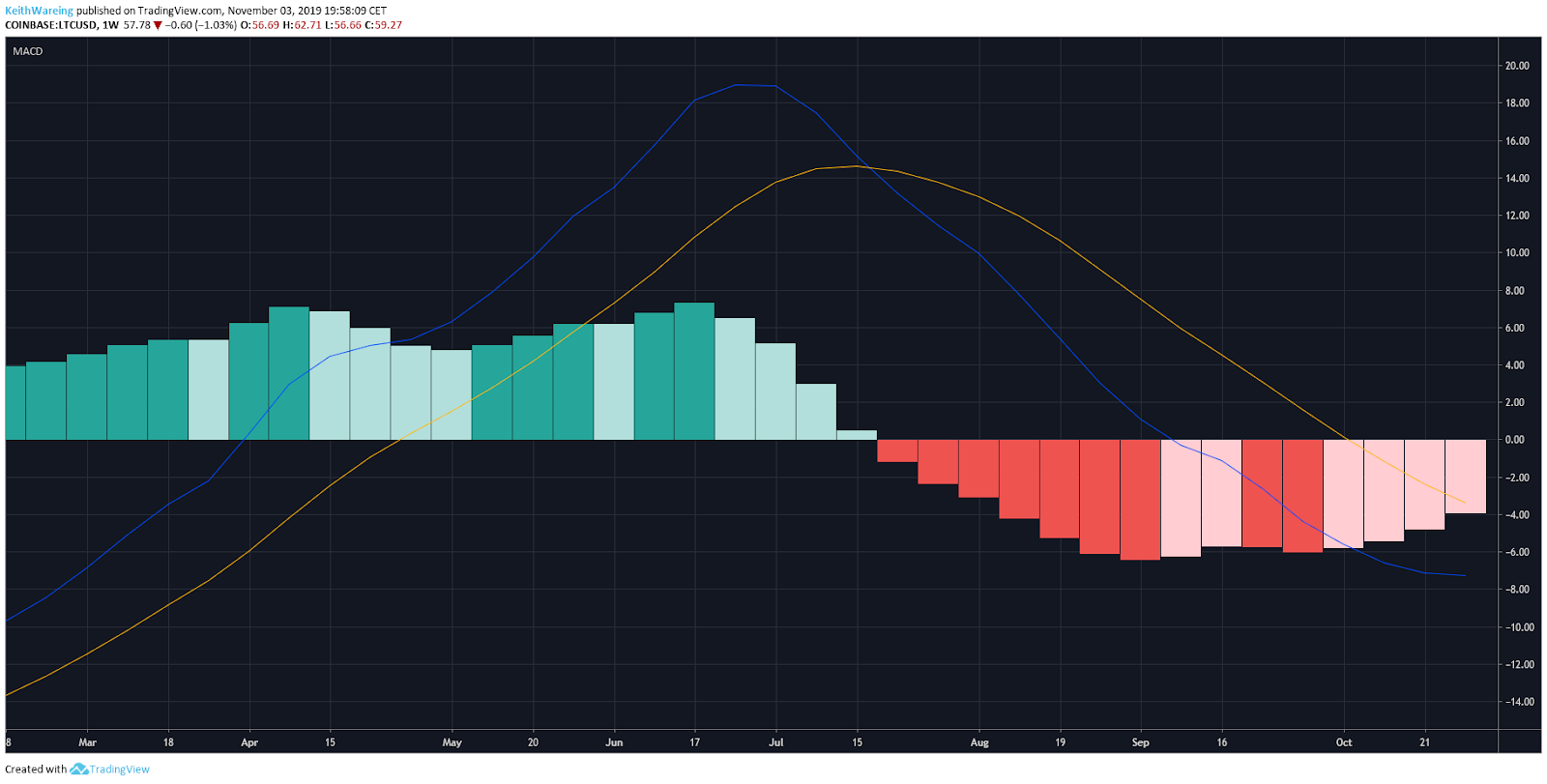 From a glance of Litcoin’s weekly MACD, we can see that whilst the MACD and signal lines look almost identical to that of Bitcoin, the histogram is showing is that a bullish reversal is likely to be more imminent than Bitcoin’s weekly MACD. Litecoin has printed four consecutively weaker candles whereas there are only two on Bitcoin.

As the weekly candle draws to a close on Litecoin, it is likely to show a stronger buy signal to that of Bitcoin, and the RSI provides further confirmation of this.

Compared to Bitcoin, Litecoin’s RSI is at 38.96 after a bounce from 34. Typically traders that use the RSI to identify heavily oversold assets would be looking for a reading below 30, but it’s a far better signal than Bitcoin’s current reading in the high 50’s.

As such, from a purchasing point of view, Litecoin looks to have greater upside potential and stronger technicals than Bitcoin for the week ahead.

As Bitcoin continues to consolidate, the first level of support can be found at $8,600. The bears might be cheering this forthcoming week so I’d expect this would be a short-lived victory.

Should $8,600 fail to hold, the next levels are $7,900 and then $7,200. The doom and gloom scenarios calling for a revisit to $6,000 are now less likely to playout, however never say never, Bitcoin forever surprises investors and traders alike.

Bitcoin is currently about $600 away from both support and resistance, but a break upwards at this stage could see the price begin to form a new level of support around the $9,900 region.

The views and opinions expressed here are solely those of the @officiallykeith and do not necessarily reflect the views of Cointelegraph. Every investment and trading move involves risk. You should conduct your own research when making a decision.