The last 24-hours have been an absolute roller coaster for Bitcoin price (BTC). Earlier in the week, BTC swiftly dropped by 10% after failing to hold above the $8,400 support.

By Thursday, BTC/USD was sitting on the bottom trendline of a descending wedge pattern and many investors and analysts were calling for a drop to $7,000.

A few even predicted that a revisit to the long-term support at $6,500 was on the cards. Despite the bearish bias, trades like Scott Melker and Michaël van de Poppe spotted a series of bullish divergences on the 4-hour and daily timeframe and by Friday morning (Oct. 25) the chart and various indicators on the hourly and 4-hour timeframe were flashing bullish.

Investors believed that a quick upside move to $7,700-$7,800 would occur and many expected that bears would open their short positions at the top of this range and eventually push Bitcoin price back down to the mid $7,000s or high $6,000s at worst.

Bitcoin price does the opposite

Obviously, this is exactly what did not happen and the short squeeze that accompanying the first part of Bitcoin’s 16% rally from $7,450 to $8,600 resulted in the liquidation of $150 million shorts at BitMEX. 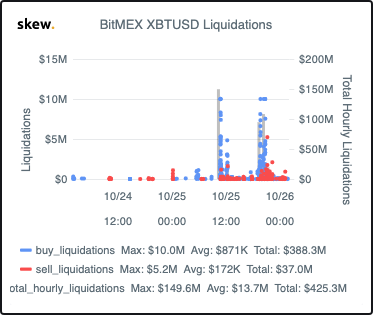 After such a strong move, consolidation around the $8,300 to $8,500 region was the next expectation that traders had in mind. Tackling the $8,800 resistance would have been the next step and it seemed likely that this would play out depending on the state of the weekly candle at closing.

Surprisingly, Bitcoin bulls gathered up enough steam for a final hurrah, and towards the evening of the U.S. trading session bull pressed Bitcoin price far above the $8,800 resistance to set a higher high at $10,540.

Analysts and traders will probably spend the weekend searching for the exact reasons that catalyzed today’s strong 36% surge — the biggest daily gain since 2011.

Currently, the crypto community is pointing to Chinese President Xi Jinping’s call for the development of blockchain technology throughout the country. Bakkt’s Bitcoin futures back to back all-time high volume achievements are also being cited as a reason for Bitcoin’s surge.

What are the next steps? 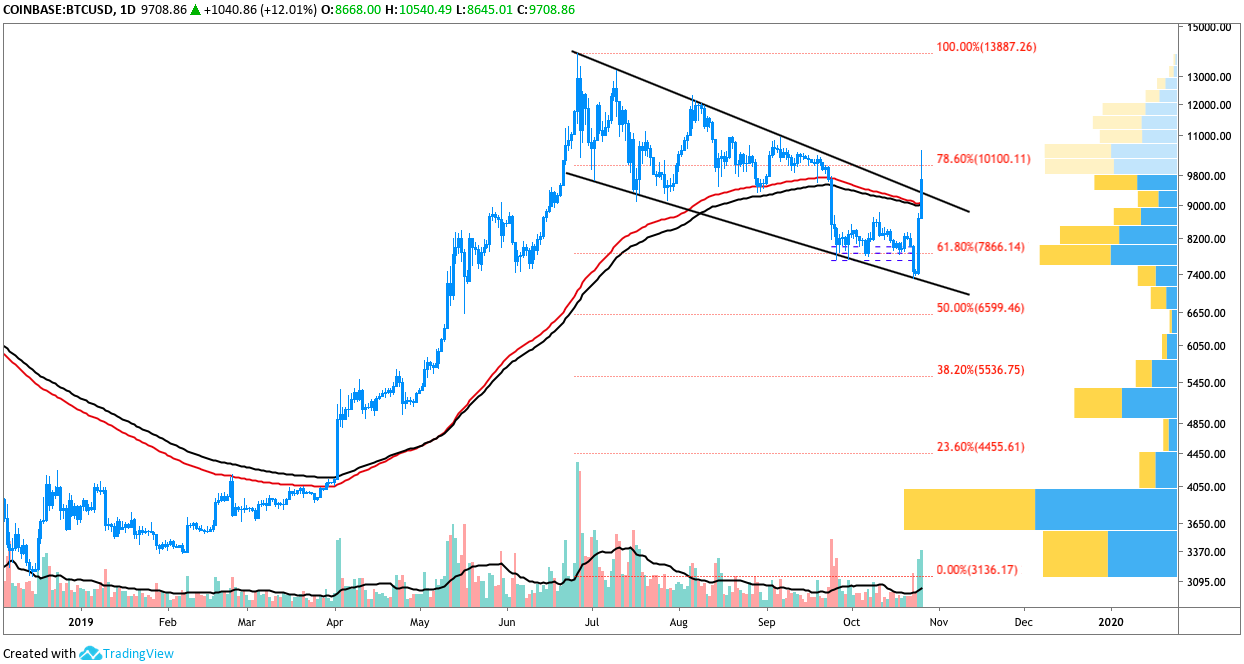 As shown by the daily chart, Bitcoin bounced off the descending trendline at $7,400, rallied up to the 61.8% Fibonacci retracement level, then rocketed through the 111, 128 and 200-day moving averages (DMA).

The volume profile visible range shows that numerous levels of resistance were sliced through and the wick to $10,542 set a higher high not seen since Sept. 6. Bitcoin stopped its advance right at a high volume node (VPVR) and a move above $10,542 should proceed toward $10,970 and $11,500, and then to $12,00, according to the daily chart.

If Bitcoin can clear $12,000 over the coming weeks, it’s pretty much open air after that. 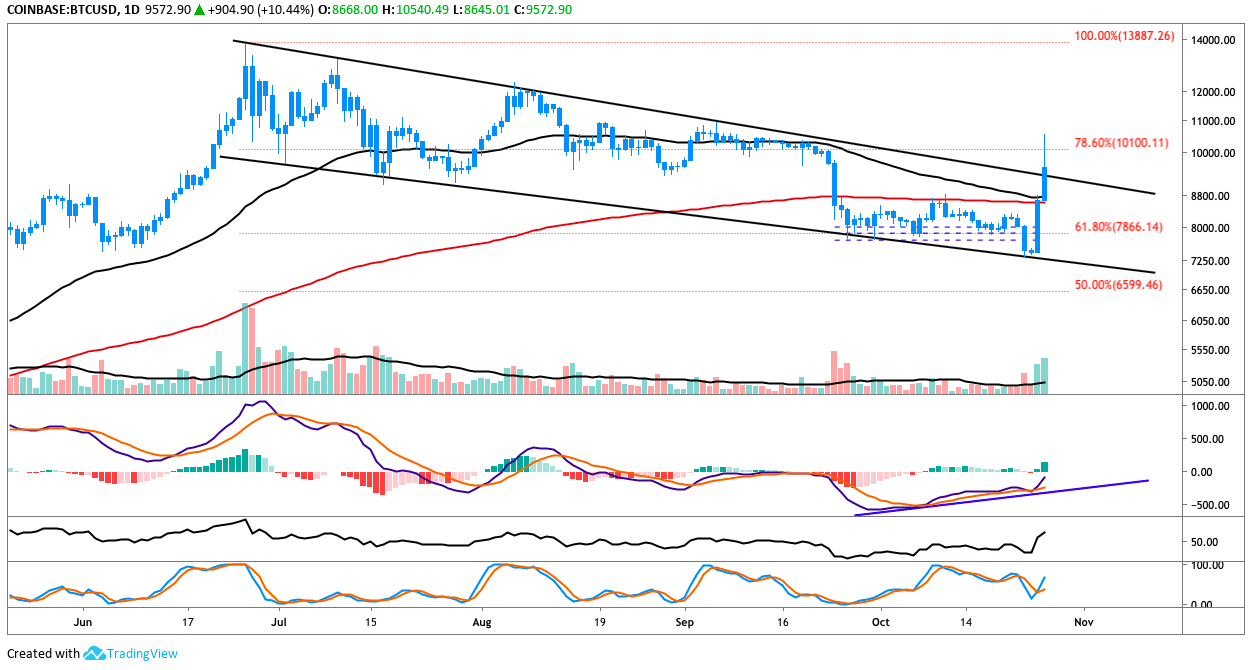 At present, the forecasted death cross between the 50 and 200-DMA has been avoided and the 50 DMA is curling away from the 200 DMA.

The MACD line shot far above the signal line and the bullish divergence that analysts identified on the daily MACD and RSI proved to be an early indicator of what was to come.

Divergence is simply when the price trends in one direction and an oscillator trends in a counter direction. 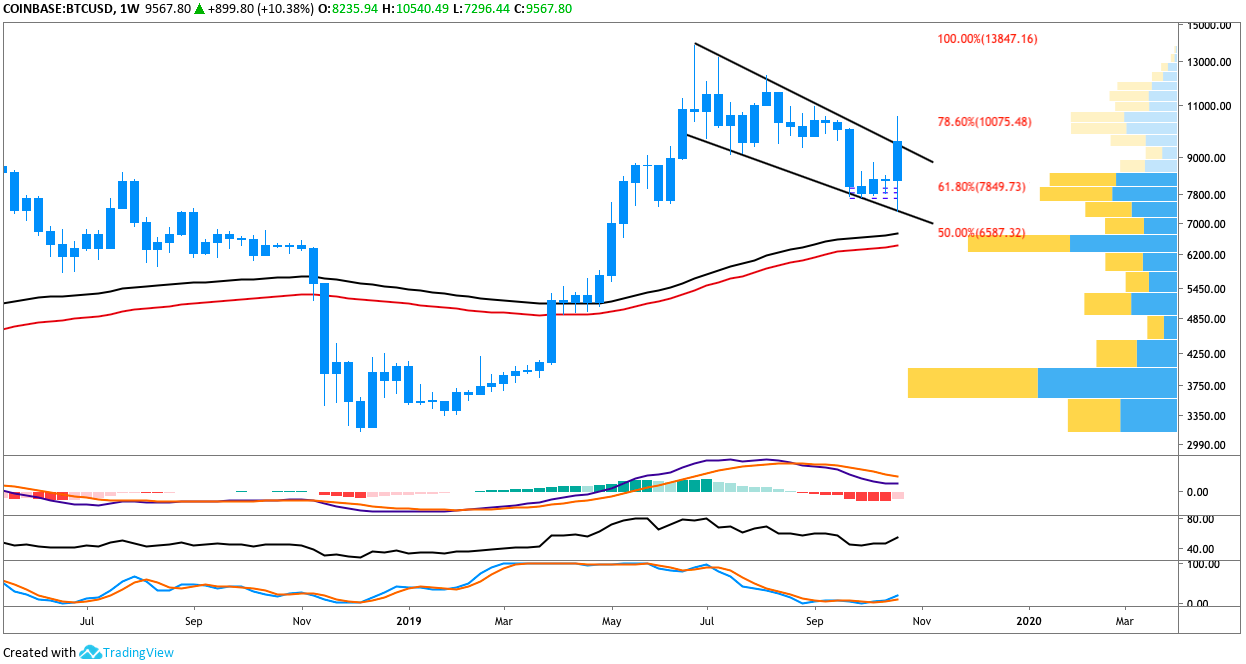 The 36% surge even altered the trajectory of the weekly MACD, flipping the histogram from deep red to pink and curving the MACD up toward the signal line.

As shown by the chart above, barring some unprecedented price reversal, Bitcoin appears set for a pleasant weekly close above the descending channel. Some will even go as far as labeling the current setup a trend reversal.

Over the short-term, it is possible that Bitcoin could pull back to the upper arm of the descending channel at $9,360. This point also aligns with the upper arm of the Bollinger Band indicator and after strong upside moves the price has a tendency to settle near the top arm and the middle moving average of the indicator. 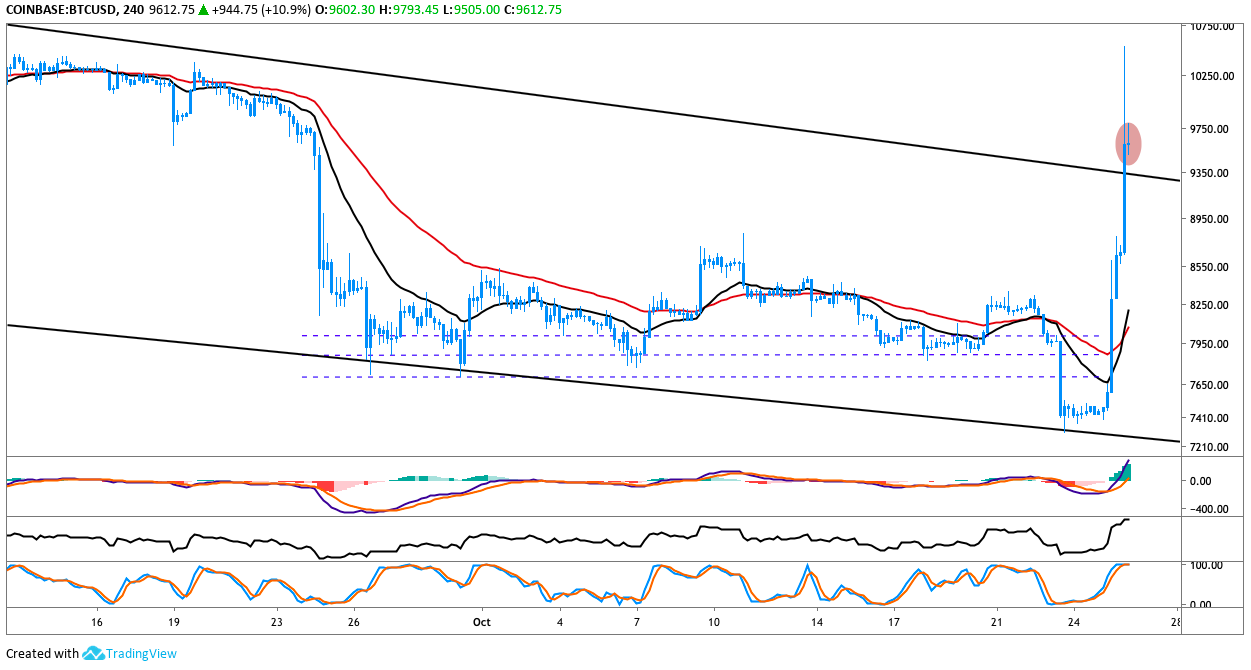 At the time of publishing, there is a spinning top candle on the 4-hour chart and volume has dropped off significantly when compared against the high volume spike seen on Oct. 26. As mentioned earlier, the MACD on this time frame is pulling a reading not seen since Aug. 5, 2019.

The 4-hour RSI has also popped above 85, a point which in the past has marked exhaustion from buyers. The same can be said for the Stochastic RSI (Stoch).

If Bitcoin has become oversold on the shorter timeframes, then the current spinning top candle is evidence of this. The current pause in momentum and indecision could also be the result of profit-taking and a drop off in volume as traders are wary of buying the top after such a high volume breakout.

If the rally does not resume shortly, most traders will probably observe to see whether Bitcoin consolidates and builds support before entering into new positions.

The views and opinions expressed here are solely those of the author (@HorusHughes) and do not necessarily reflect the views of Cointelegraph. Every investment and trading move involves risk. You should conduct your own research when making a decision.