Sunday, Feb. 24 — the top 20 cryptocurrencies are reporting major gains on the day to press time. Bitcoin (BTC) broke the $4,150 mark again, according to Coin360 data. 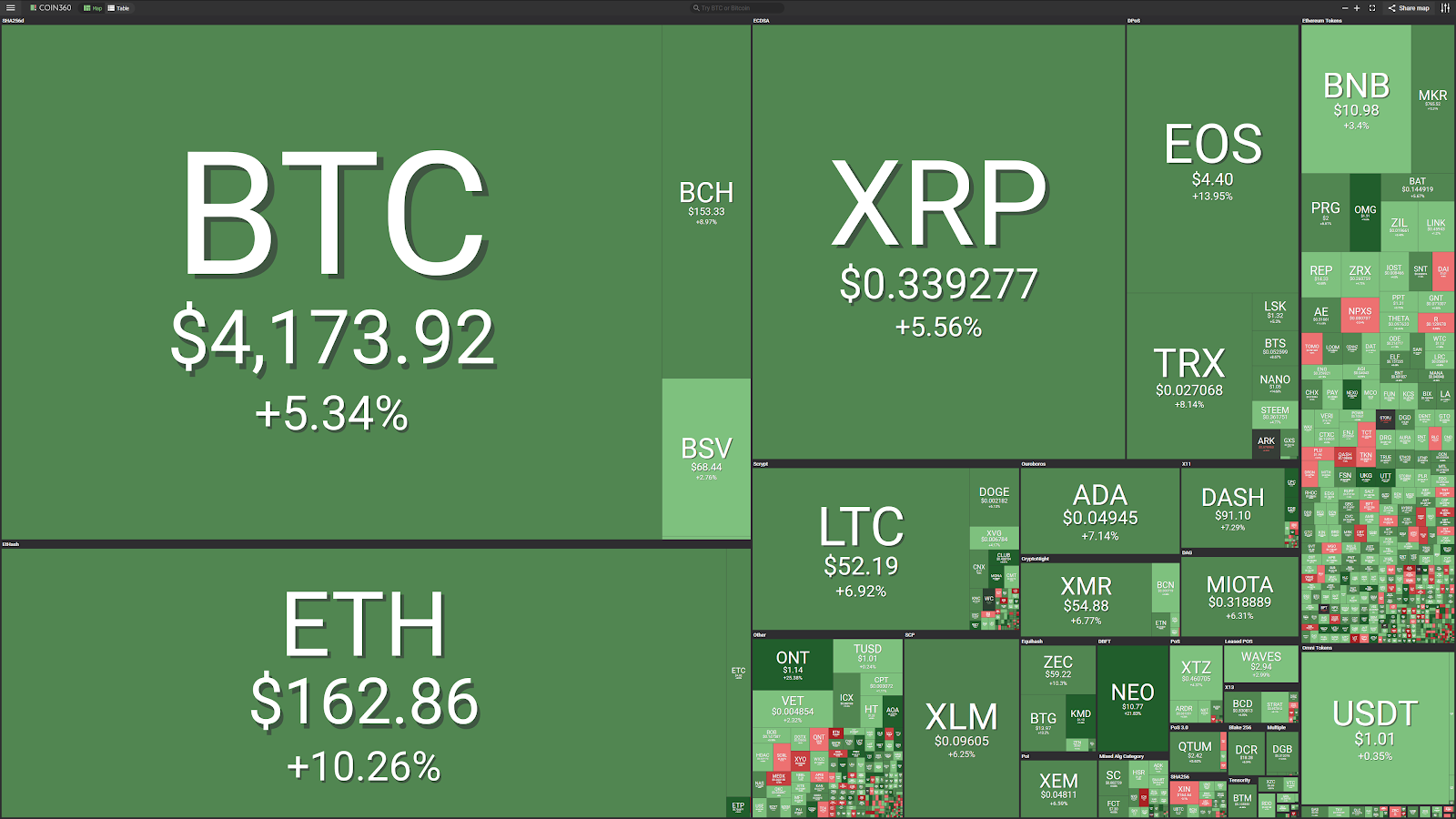 At press time, Bitcoin is up nearly 3 percent on the day, trading at around $4,100, according to CoinMarketCap data. Looking at its weekly chart, the current price is about 13 percent higher than $3,632, the price at which Bitcoin started the week.

Ethereum (ETH) is holding its position as the largest altcoin by market cap, which by press time is over $16.3 billion. The second-largest altcoin, Ripple (XRP), has a market cap of about $13.5 billion.

ETH is up by a little under 5 percent over the last 24 hours, according to CoinMarketCap. At press time, ETH is trading around $155, after having started the day at $148. On its weekly chart, Ethereum has seen its value increase almost 23 percent from $126, the price at which the coin started the week.

Ripple has gained 4.42 percent in the 24 hours to press time and is currently trading at around $0.33. On its weekly chart, the coin gained almost 9 percent from $0.30, the price at which XRP started the week.

Among the top 20 cryptocurrencies, the ones experiencing the most notable growth are Ontology (ONT) and Neo (NEO), both up about 14 percent on the day to press time.

The total market capitalization of all cryptocurrencies hit a multi-month high of almost $144 billion today, before dropping down to $139.5 billion by press time.

The team behind Ontology announced yesterday that the Ontology Development Platform was released on the Google Cloud Platform Marketplace. This, according to the announcement, makes Ontology “one of the first public blockchains to have a development platform on the leading cloud provider marketplaces: Google Cloud, Amazon Web Services, and Microsoft Azure.”

Earlier this week, news broke that the Russian State Duma (the lower house of the Federal Assembly of Russia) plans to review and adopt new cryptocurrency regulation in March and that the country’s former Energy Minister, Igor Yusufov, is also proposing an oil-backed cryptocurrency.