Volatility coupled with one of the longest bear markets ever experienced by the cryptocurrency industry have compelled many investors to consider staking as a method of “playing it safe,” according to a Bloomberg article.

Staking, which is similar to earning dividends or interest on your investment, is not a new concept. However, in a long bear market, it does become more prevalent among cryptocurrency investors, as possible gains from regular trading are not as fruitful. As Kyle Samani, managing partner at Multicoin Capital Management, stated to Bloomberg:

“Regardless of market conditions, staking provides returns denominated in the asset being staked. If you’re going to be long, you might as well stake.”

Staking rewards are a byproduct of the proof-of-stake (PoS) consensus algorithm, first introduced by Sunny King and Scott Nadal in a white paper in 2012 for peer-to-peer cryptocurrency Peercoin (PPC).

Since then, hundreds of cryptocurrencies have adopted a PoS consensus algorithm as a method to verify transactions.

The majority of cryptocurrencies use either proof-of-work (PoW) or PoS — or some iteration of it.

PoW relies on the proof that a certain amount of work has been done to verify transactions. Both Bitcoin and Ethereum use PoW to validate transactions, although Ethereum has been making it clear that they will be moving to a PoS system, called Casper, as part of the Serenity network update expected for later in 2019.

At an August 2018 Blockchain at Berkeley event, hosted by the student-run organization Origin, Vitalik Buterin, co-founder of Ethereum, stated he can’t wait for all crypto networks to move away from PoW:

“I am seriously looking forward to when the cryptocurrency community basically passes away with proof-of-work.”

With PoW, nodes (or miners) compete to verify blocks of transactions by running highly specialized and expensive processing equipment (such as Application Specific Integrated Circuits, or ASICs) to solve complex mathematical equations. The first node to solve the equation can add the next block of transactions and collect the reward, which could either be a set amount or percentage of the transaction fee. The process, also called mining, has a number of drawbacks:

PoS, on the other hand, only requires network participants to hold a certain amount of the native cryptocurrency in a specific wallet for a certain period of time. This is called staking and doesn’t call for any expensive computer equipment or massive amounts of processing power to solve complex mathematical equations.

Key differences from POW are: 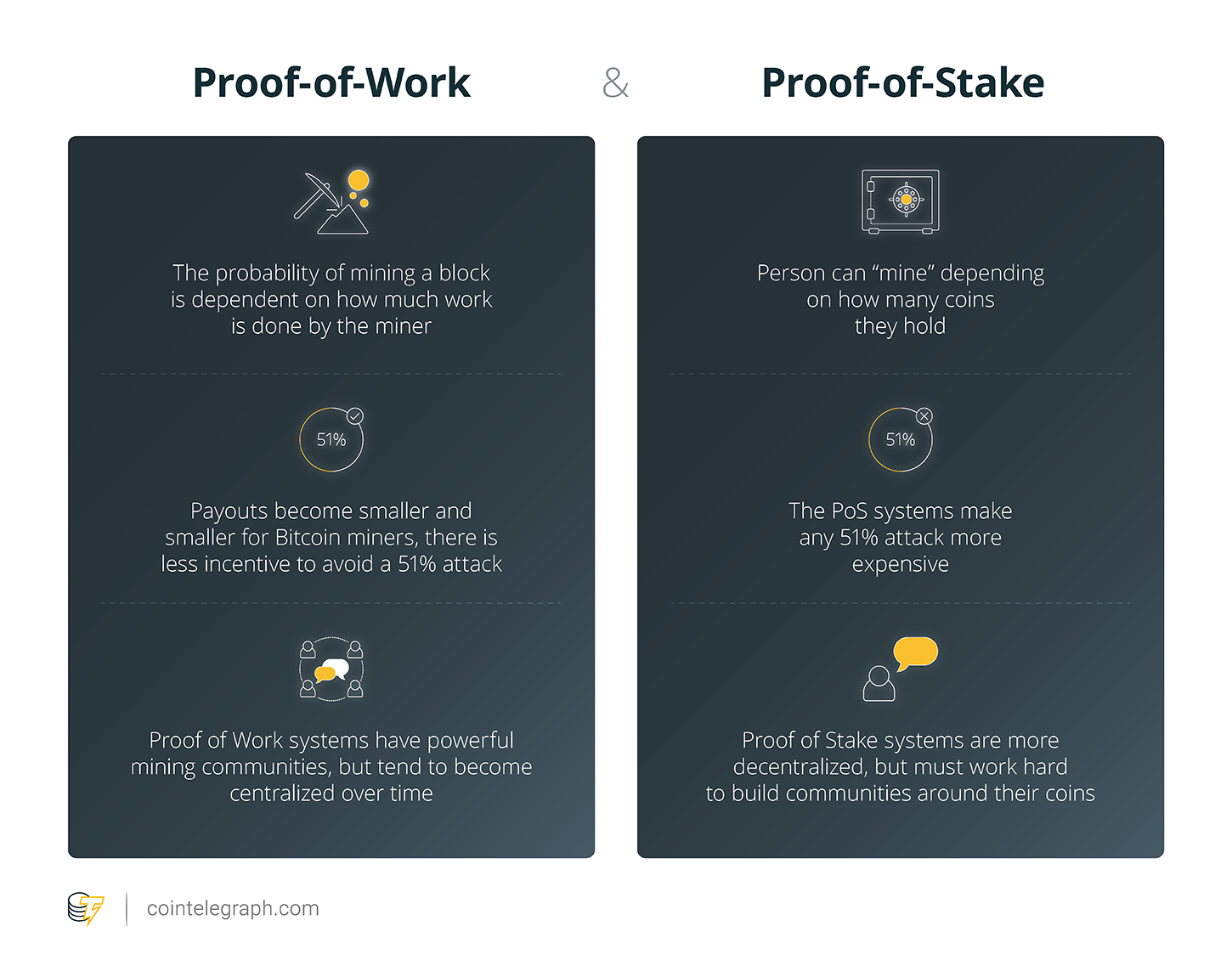 It is common in PoS cryptocurrencies to award those with a bigger vested interest in the network with bigger benefits. This is both in network authority (such as voting weight) and rewards.

As such, cryptocurrency networks will often offer different levels of staking — i.e., the more coins you lock away for staking, the bigger the network will reward you.

Masternodes are network participants that are tasked with validating and authenticating transactions on a PoS blockchain.

To apply for a masternode, participants will generally have to comply with some minimum requirements. This will be different from network to network but may include locking away a set number of tokens (typically a large minimum), being a network participant and holding tokens for a certain period of time, and being an active community member with a good reputation. The number of masternode positions will generally also be limited.

Rewards are distributed as part of the network fees (transaction fees) and tend to be big, as the vested interest in the network needs to be big. But the barrier to entry is also quite high — i.e., you would need a large initial investment to become a masternode.

For example, to become a Neo masternode (also called bookkeepers or consensus nodes), a participant will need to stake 1,000 GAS ($2,150) — the fuel token on the Neo network that represents the right to use the Neo blockchain and is used to pay the network fees for issuing new assets, running smart contracts and storage — to nominate themselves as a bookkeeper and also obtain a consensus authority certificate before Neo community members can vote for them. The Neo mainnet is limited to seven consensus nodes

According to Neo’s economic model, the maintainer of a Neo consensus node will be rewarded with network fees.

Similarly, to apply for masternode status (also called Authority Masternode) on VeChain (VET), a participant will have to stake 25 million VET ($97,500) to be considered and will have to complete Know Your Customer (KYC) verification in the VeChain portal. Its masternode positions are limited to 101 members.

VeChain masternodes are compensated in part by transaction fees and part from a predetermined foundation reward pool.

Non-node staking is less complicated, and users are not involved in validating transactions. There is no minimum staking amount and often no minimum holding period, meaning the barrier of entry is much lower.

All a network participant has to do is hold the specific cryptocurrency in the network’s dedicated wallet to start earning interest or dividend payouts.

Both the Neo and VeChain examples above have calculators to show you how much you can earn per amount of tokens staked.

According to POS List and masternodes.online, rewards and earnings for both masternode staking and non-node staking vary significantly between cryptocurrencies, anything from 0.7 percent to well over 1,000 percent.

The possibility of long-term gains has also given birth to a number of startups that focus specifically on providing staking services to investors, including Anchorage, Eon Staking Inc., Figment and Staked.

Perhaps as an indication of the strong market interest in the possibilities of cryptocurrency staking, on Jan. 31, 2019, Staked announced that they raised $4.5 million in seed investment from a number of institutional investors that included Pantera Capital, Coinbase Ventures and Winklevoss Capital, while Anchorage launched on Jan. 23, 2019 after a $17 million funding round led by venture fund Andreessen Horowitz.

PoS staking is not without risk, though. It’s not just a bear market game, it’s a long game. So, a significant level of trust has to be put in the cryptocurrency network — trust that they will make it through the bear market and still be operational on the other side, and trust that they will consistently payout earnings and rewards in the long run.

Another risk is monopolization of a network, where a few large token holders end up getting the lion’s share of the rewards. Linked to the risk of monopolization is the possibility of a 51 percent attack. Although it would be much more expensive and counterintuitive, it is still possible for such an attack to be orchestrated and to devalue the network.