A working group of South African financial regulatory organizations has released a consultation paper focused on cryptocurrencies, calling for public input to develop a cryptocurrency regulation policy for the country.

This latest consultation paper is the most in-depth review of cryptocurrencies from South African financial institutions since an initial public statement on what it calls crypto assets was issued by South African authorities back in 2014.

As Cointelegraph previously reported, South Africa has taken a conservatively optimistic approach toward cryptocurrencies. The sector has been relatively unregulated, allowing blockchain-based businesses like cryptocurrency exchanges to operate, but SARS imposed taxes on crypto gains and investors were cautioned about the associated risks of investments made.

Over the next few years, the cryptocurrency industry grew exponentially, and the surge of interest led to the establishment of an Intergovernmental Fintech Working Group (IFWG), which began developing a review for regulators and policymakers focused on fintech, taking into account the implications for the financial sector and economy of South Africa.

The IFWG has described its approach to fintech as balanced, weighing up the benefits and risks of the sector.

At the beginning of 2018, the IFWG began its review and the release of the consultancy paper is the culmination of a year’s work. Reviewing the current state of cryptocurrency-focused activities, two specific use cases have been analysed by the IFWG. This includes the buying and selling of crypto assets, and transactions made with crypto assets.

The consultation paper provides a complete breakdown of the perceived risks and benefits of crypto-related activities and goes on to present recommendations for policies toward crypto assets from a South African perspective.

Most importantly, the IFWG has called upon the South African public to give feedback on the paper and engage on the way forward, while making it clear that there was no intent to ban the use of cryptocurrency in the country. 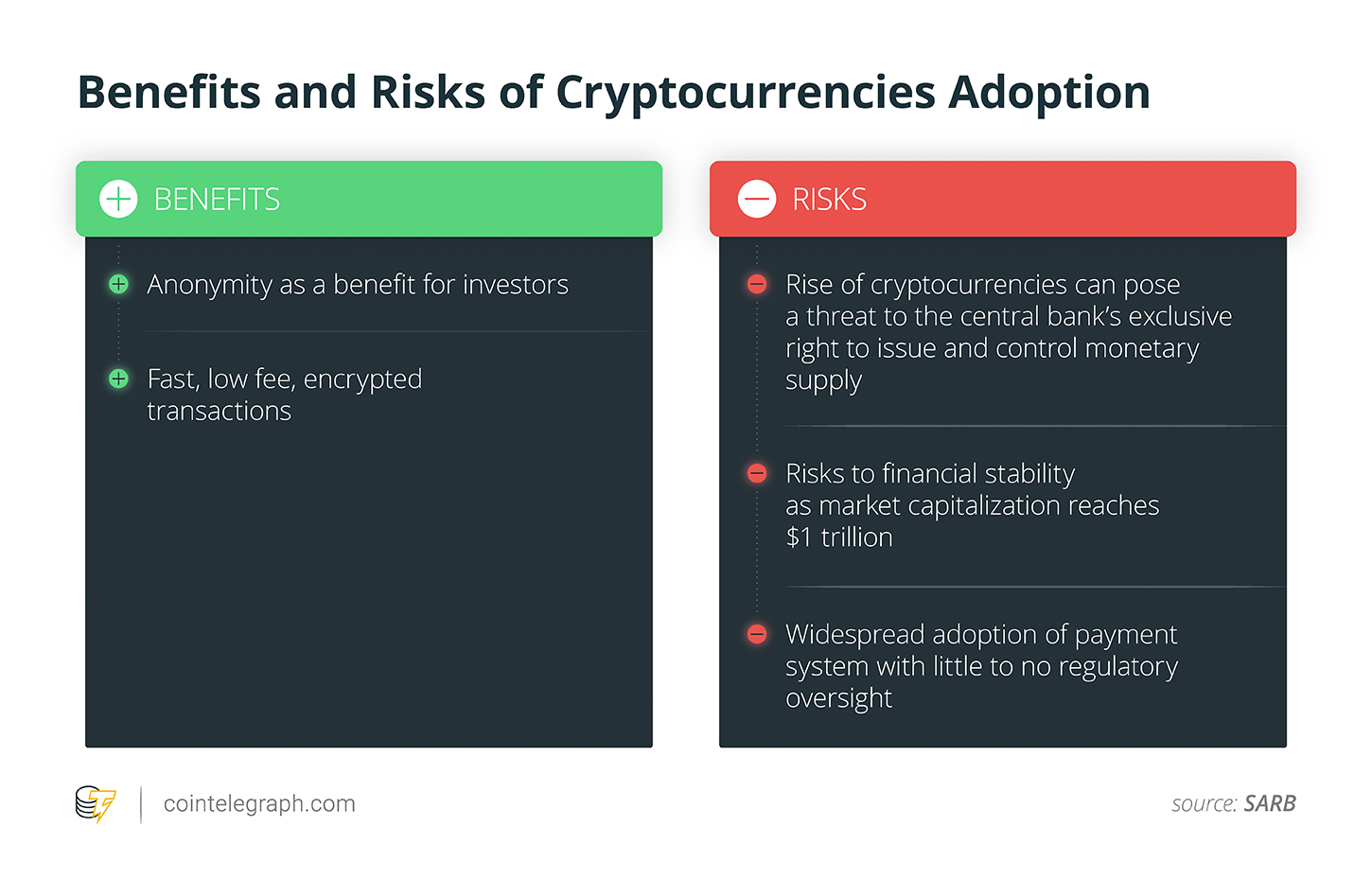 Secondly, the paper recognizes the potential risks posed to financial stability, should the market capitalization grow to over $1 trillion. This figure is said to be psychological barrier that would lead to regulatory scrutiny by financial institutions and lawmakers around the world.

While the risks mentioned are hypothetical, the need for a regulatory response has been prompted by concerns already experienced in South Africa. This includes the need for consumer protection while preventing possible misuse for money laundering and terrorist financing, exchange control evasion, illicit transactions, tax evasion and a lack of market stability.

The paper also notes the benefits that cryptocurrencies could provide South Africans.

Local investors could find some solace investing in cryptocurrencies, which are an asset class not tied to the risks created by political and economic instability in the country.

Furthermore, the working group notes the often-touted benefits of cryptocurrencies — including fast, low fee, anonymous and encrypted transactions — but a lack of working use cases proving these points has led to the belief that major adoption won’t be seen in the medium to long term.

Cryptocurrency regulation has been the subject heavy debate around the world, with many countries taking varying stances. Given that the nature of cryptocurrencies is essentially borderless, this makes it very challenging from a regulatory perspective.

With this in mind, the report identifies two possible approaches to cryptocurrency regulation.

The first is enforcing regulations on cryptocurrencies in accordance with existing legislature. This effectively leaves businesses involved in the cryptocurrency and blockchain industries bound to actual laws.

The major focus is avoiding overregulation, which would tend to stifle innovation of the sector.

Naturally, a balanced approach seems to be the ideal way forward. The South African report makes reference to researcher Jan Lansky’s suggestions of country-specific approaches to cryptocurrencies, as seen below.

The classification ranges from 0 to 5, with 0 on one side of the spectrum, where countries completely ignore cryptocurrencies, and 5 is the opposite, where a country has either enforced bans or fully integrated.

According to this measurement system, South Africa registers at level 2, given the paper released by SARS in 2018, which enforced normal income tax rules on cryptocurrencies.

Better compliance is the aim

With this in mind, the working group would like to see South Africa climb further up the level of classification of Lansky’s matrix.

Perhaps most importantly, South Africans don’t have to worry about any impending bans on the use of cryptocurrencies. The working group made in clear that there were no plans to ban the buying, selling or holding of cryptocurrency.

The report concedes that a certain level of regulation is needed. To this end, specific requirements will be set out to meet Anti-Money Laundering/Combating the Financing of Terrorism (AML/CFT) standards.

The report seems to have been met with positive responses in South Africa. According to Marius Reitz, Luno’s South Africa country manager, the daily volumes have exceeded 1,200 BTC per day on its South African exchange in recent months:

“These numbers demonstrate the growing adoption of cryptocurrencies in South Africa and across the globe and reinforces our aim of upgrading the world to a better financial system.”

Reacting to the SARB report, Reitz said consumers in the country will have peace of mind knowing cryptocurrency service providers are being held to certain standards:

“SARB is taking an activity-based approach, meaning they are not proposing to regulate cryptocurrency itself but rather those persons or entities that provide services involving virtual assets.”

Reitz also noted the importance of the implementing requirements to meet AML/CFT standards, as well as the overall positive influence that well-balanced regulation could have for the sector:

“This will help keep out fraudsters and other operators with low concern (or capabilities) to keep customer information and money safe. We’ve seen that regulation in the industry can have a very positive impact. Imposing regulations in South Africa (and across the world) will enhance general trust in and stability of the market. It may also result in even more talent and investment capital flowing into the industry, unlocking more business models and bringing more advanced products to market.”

Cointelegraph also spoke to James Preston, project lead at local publication SA Crypto, who has been involved in the space for the past five years. He suggests that the move is a balanced approach that protects conventional financial institutions and consumers while not impeding on the use of cryptocurrencies:

“Having carefully read through SARB’s consulting paper on regulating crypto assets in South Africa, it’s clear to me that they want to be as progressive as possible without hindering and infringing on the security of South Africa’s central banks.

“Despite them trying to mitigate the risk, and trying to remain as traditional as possible in terms of fiat, centralised monetary systems, they are still being progressive in their approach to crypto assets.”

South Africans have until Feb. 15, 2019 to provide input on the proposed way forward by the South African Reserve Bank.