Earlier this week, the Ethereum Classic (ETC) reportedly underwent a 51 percent attack. In the aftermath, crypto exchange Coinbase noted that upwards of $1.1 million in crypto was double spent during the time of the deep blockchain reorganization. Coinbase and several other cryptocurrency exchanges temporarily paused deposits and withdrawals of the altcoin to prevent loss of funds. Crypto exchange Gate.io confirmed that the attack was carried out and promised refunds, stating that around 54,200 ETC in total (worth around $271,500 at the time) was transferred during the attack. However, Gate.io also reported later that $100,000 was returned to them with no explanation, prompting rumors of participation by a white hat hacker.

This week, the social media platform Gab announced that both Coinbase and the Square Cash app had banned the personal account of Andrew Torba, the founder of Gab. As reported earlier last year, Gab.com’s business account on Coinbase had already allegedly been closed in December. The blocking of Torba’s Square Cash account occurred after the reported Coinbase block, and also after Gab sent an email to its user base promoting both the Cash App and Bitcoin. Gab is a social media platform that promotes itself as a place for free speech, becoming in effect a draw for those blocked on other platforms for hate speech concerning right wing extremism. 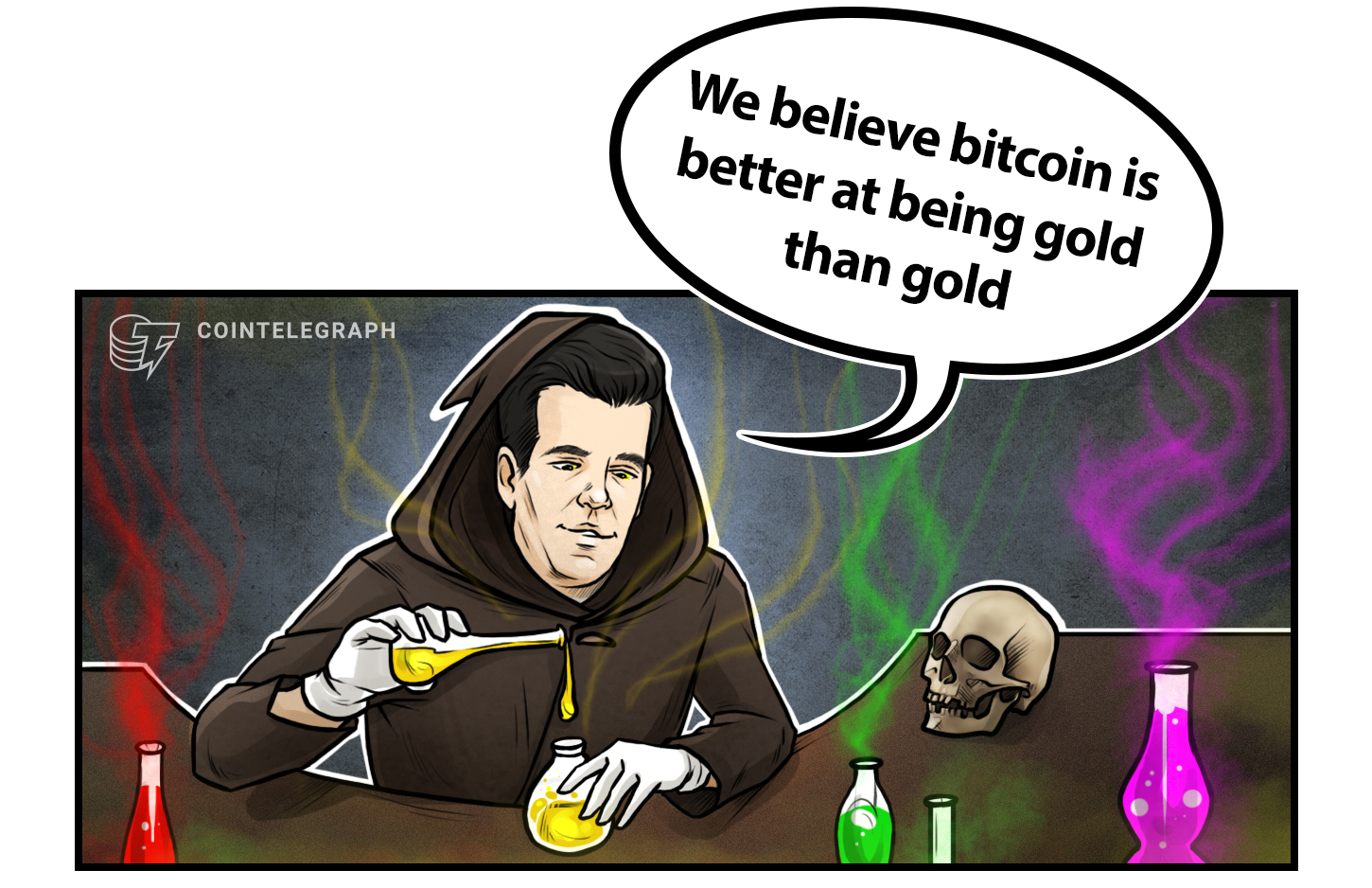 The CEO of Epic Games, Tim Sweeney, said this week that the addition of altcoin Monero (XMR) as a payment option for the Fortnite merchandise store was an accident. The store, called Retail Row, accidentally began accepting the altcoin on Jan. 5, according to tweets from developer Riccardo Spagni. Sweeney, denying the rumors, said this week that the addition of Monero was unintentional, and that staff have since removed the privacy-centered altcoin from the store’s payment option. Sweeney also denied that Epic Games had partnered with crypto payment processor GloBee.

A number of long-dormant Bitcoin wallet have seen an uptick recently, Bloomberg reported this week, which could mean that major BTC whales might influence the crypto market. According to analysis from crypto analytics startup Flipside Crypto, several long-inactive BTC holders have begun to move their coins, meaning that wallets active over the past 30 days now hold about 60 percent of total BTC supply. Similar wallet movement preceded Bitcoin’s major historical price volatility in both 2015 and 2017 — in the latter year, the coin surged to all-time price highs of $20,000.

Cameron and Tyler Winklevoss doubled down on their commitment to getting a Bitcoin (BTC) ETF approved during a question and answer session on Reddit’s Ask Me Anything (AMA) subreddit this week. The twins also showed support for specifically Bitcoin, referring to it as “the OG crypto” and calling it “the winner in the long term.” Tyler Winklevoss also underlined the importance of blockchain versus cryptocurrencies, noting that they need each other in order to exist.

The cryptocurrency markets are holding steady at the end of the week, with Bitcoin trading at around $3,670, Ripple at around $0.33 and Ethereum at around $126. Total market cap is around $122 billion. 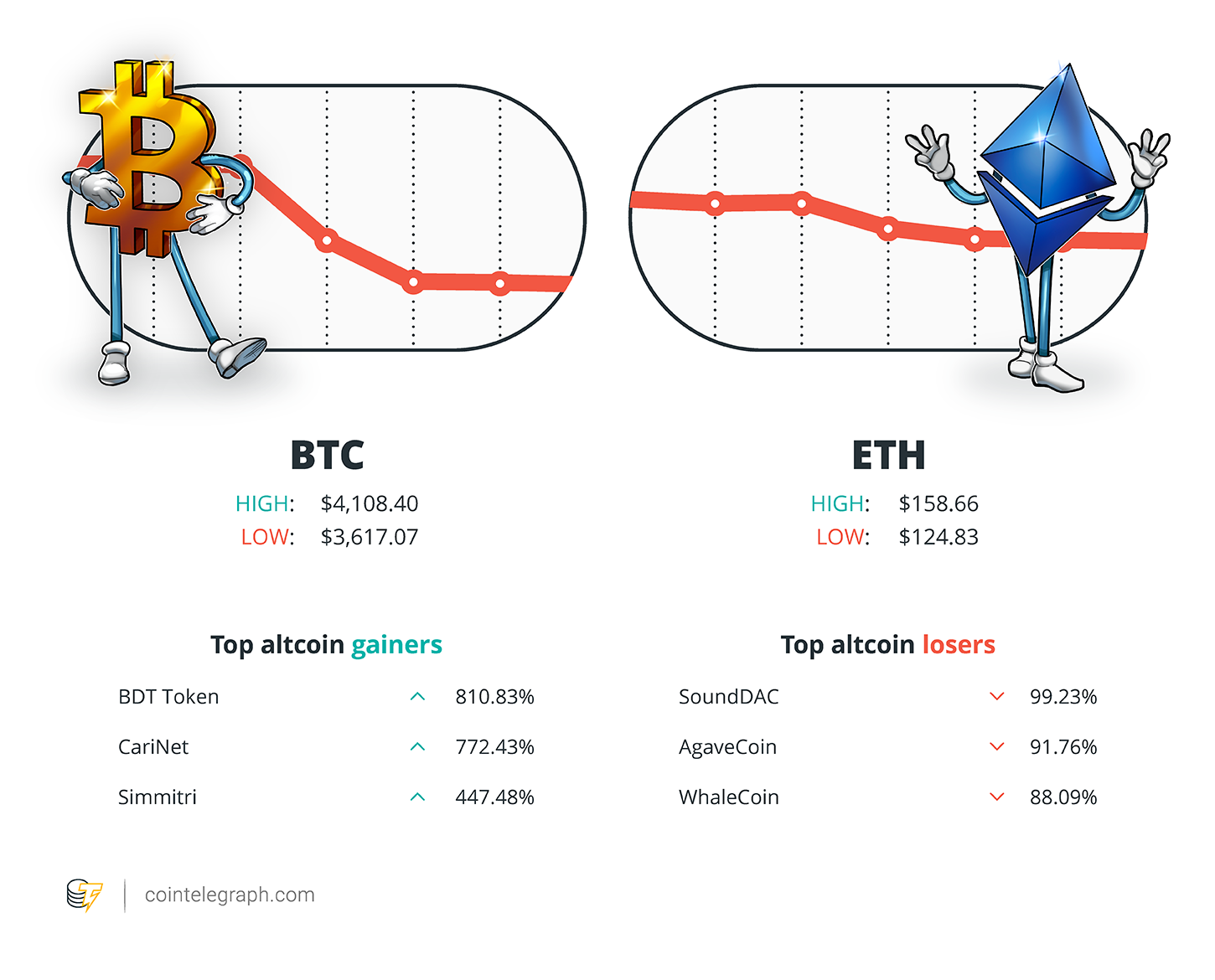 “I think we will come back a few years from now and say how could we ever have gotten into this situation where we believed this kind of a fairy-tale story,” — Ardo Hansson, governor of Estonia’s central bank and member of the Governing Council of the European Central Bank, about crypto

“We believe bitcoin is better at being gold than gold. If we’re right, then over time the market cap of Bitcoin will surpass the ~7trillion [sic] dollar market cap of gold,” — Tyler Winklevoss, co-founder of Gemini, during Reddit AMA

“Some self-proclaimed Bitcoin Maximalists are actually Bitcoin Extremists. They think all other coins are scams and will go to zero. Maximalists think Bitcoin is and will remain the dominant cryptocurrency but there is room for altcoins to exist and even do well,” — Charlie Lee, Litecoin (LTC) founder 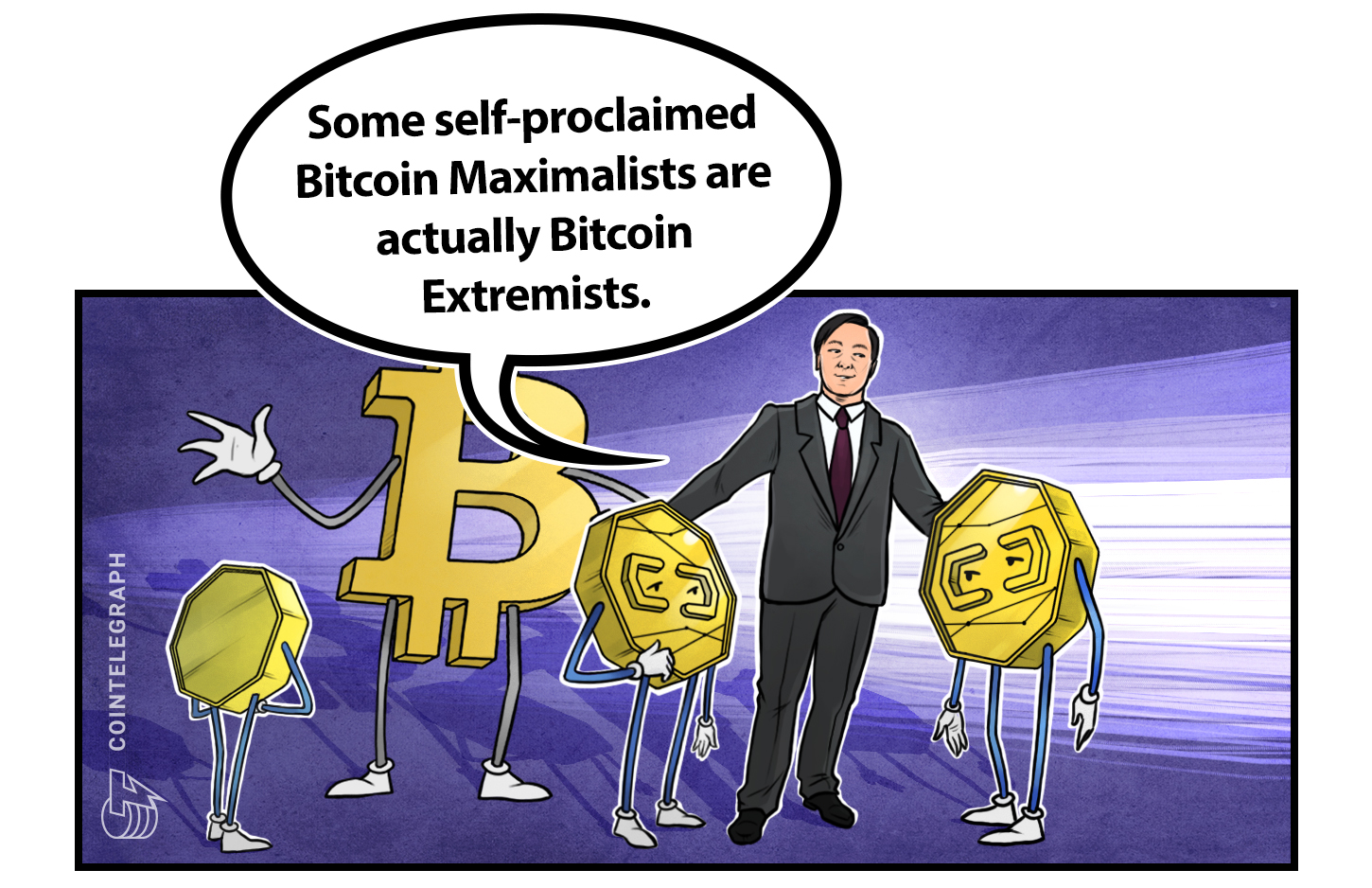 “Bitcoin has the potential to be worth a lot and to be worth zero,” — Bill Miller, noted Wall Street investor

“Ripple took a contrarian view on a bunch of things pretty early right and that made us unpopular among the die-hard crypto community. In the face of those kind of arrows, though, I still have conviction that we’re on the right path,” — Brad Garlinghouse, Ripple CEO

“You hear all the bulls**t out there, oh, this does 10,000 transactions a second. It’s all crap. We were going to melt TRON. Literally destroy it,” — Simon Morris, former Bittorrent employee, speaking about Tron’s tokenization

“The reality is it’ll probably trade sideways between $3,000 and $5,000 for another month or two while it’s trying to find which way to go,” — Vinny Lingham, CEO of blockchain identity platform Civic 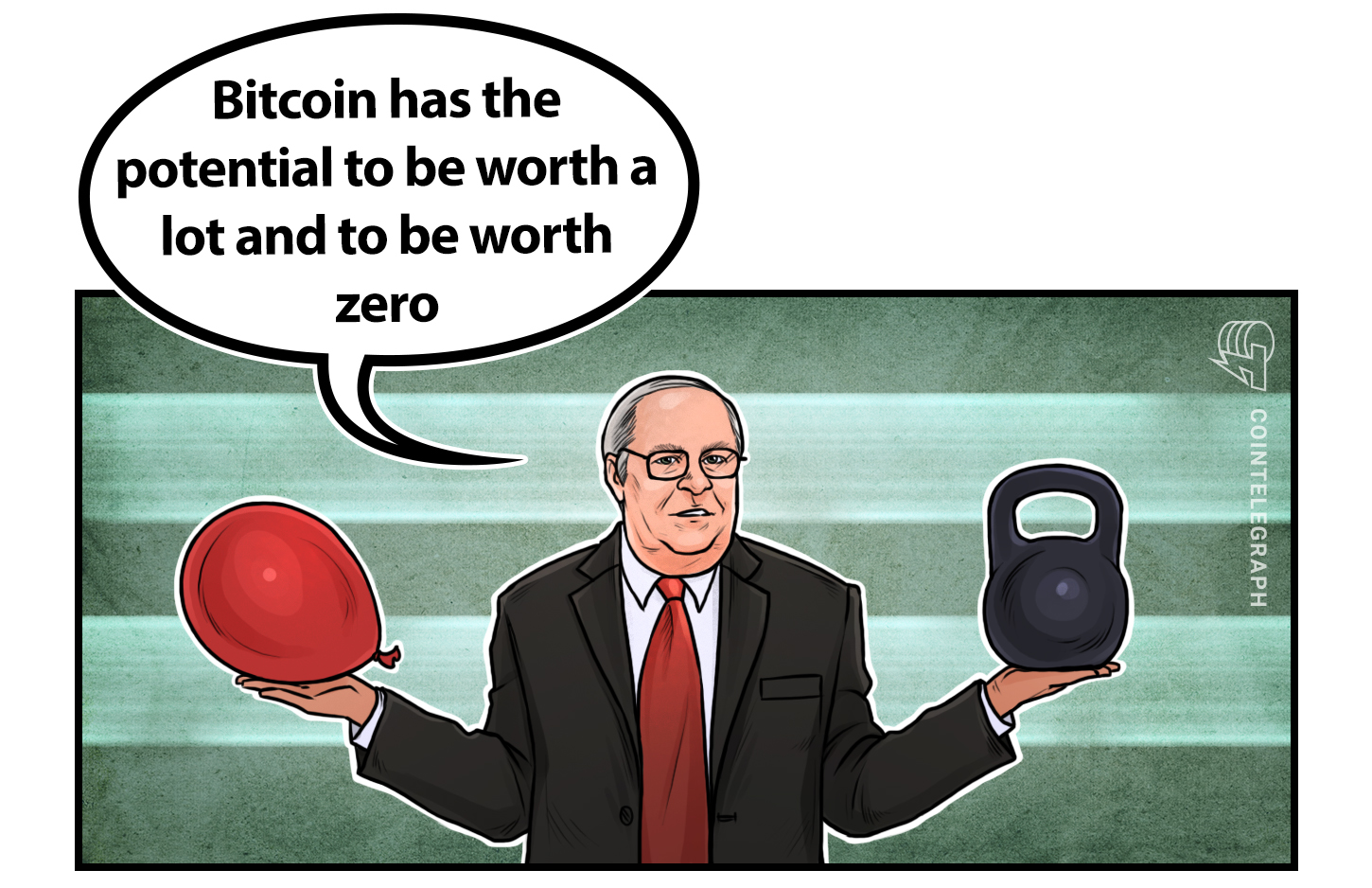 Simon Morris, the former chief strategy officer at BitTorrent, said in an interview this week that Tron doesn’t have the capabilities to manage the transaction volume that will be needed to tokenize BitTorrent. Morris said that his team needed hundreds of transactions per second just to get started, and that Tron would only be able to manage the volume if they manage BitTorrent transactions on a central server and pretend it is Tron-based. A Tron representative told Cointelegraph that “Morris appears to have little insight into BitTorrent operational plans since his departure.”

Police in India have arrested a member of a group that has been accused of conducting a cryptocurrency scam involving 5 billion rupees (around $71.6 million) this week. The case is ongoing, and this is the fourth arrest in connection with the alleged scam involving a token, dubbed Money Trade Coin (MTC). According to the police, the group artificially inflated the price of the token in order to prop up investments, leaving investors unable to sell the token when the price fell.

The Federation of Enterprises in Belgium (FEB) had their Twitter account hacked this week and made to resemble an affiliate account of major United States crypto exchange Coinbase.  After the hackers tool control of the FEB’s Twitter, they proceeded to tweet scam giveaways, offering followers a large amount of crypto if they send a small amount first. In this case, the hackers offered both 3,000 BTC and 30,000 BTC in an apparent typo to their followers. The Coinbase branding has since been removed from the Twitter account.

In the wake of the confusing and sometimes contradictory media coverage of the 51 percent attack on the Ethereum Classic network this week, Cointelegraph’s looks at the questions brought up over how security and power of proof-of-work (PoW) algorithms should and do function.

As the protests in France against the government continue, a call for a run on the banks has brought up parallels between the protestors’ goal to show the vulnerability of those in traditional positions of power, and crypto’s aim to create a parallel financial structure unconnected with traditional finance.

In the beginning of 2019, Cointelegraph takes a look back over the past year’s most memorable scams, including the fall of Bitconnect and the rising phenomenon of SIM-swapping.