Crypto Alpha News
Home News Overview of the Crypto Mining Industry in 2018: Will the Struggles Extend...

2018 has been a difficult year for Bitcoin and crypto miners. Some of the largest multi-billion dollar businesses in Asia recorded losses in the range of hundreds of millions of dollars.

As Japanese internet conglomerate GMO and the industry’s largest mining equipment manufacturer, Bitmain, reportedly struggled throughout the year, the entire sector is said to have ended the year with significant losses, following the trend of the two companies.

GMO, one of the most influential internet companies in Japan, recorded a loss of over $320 million in the fourth quarter of 2018. Following what the company described as an “unexpected loss,” the firm officially pulled out of its mining business. 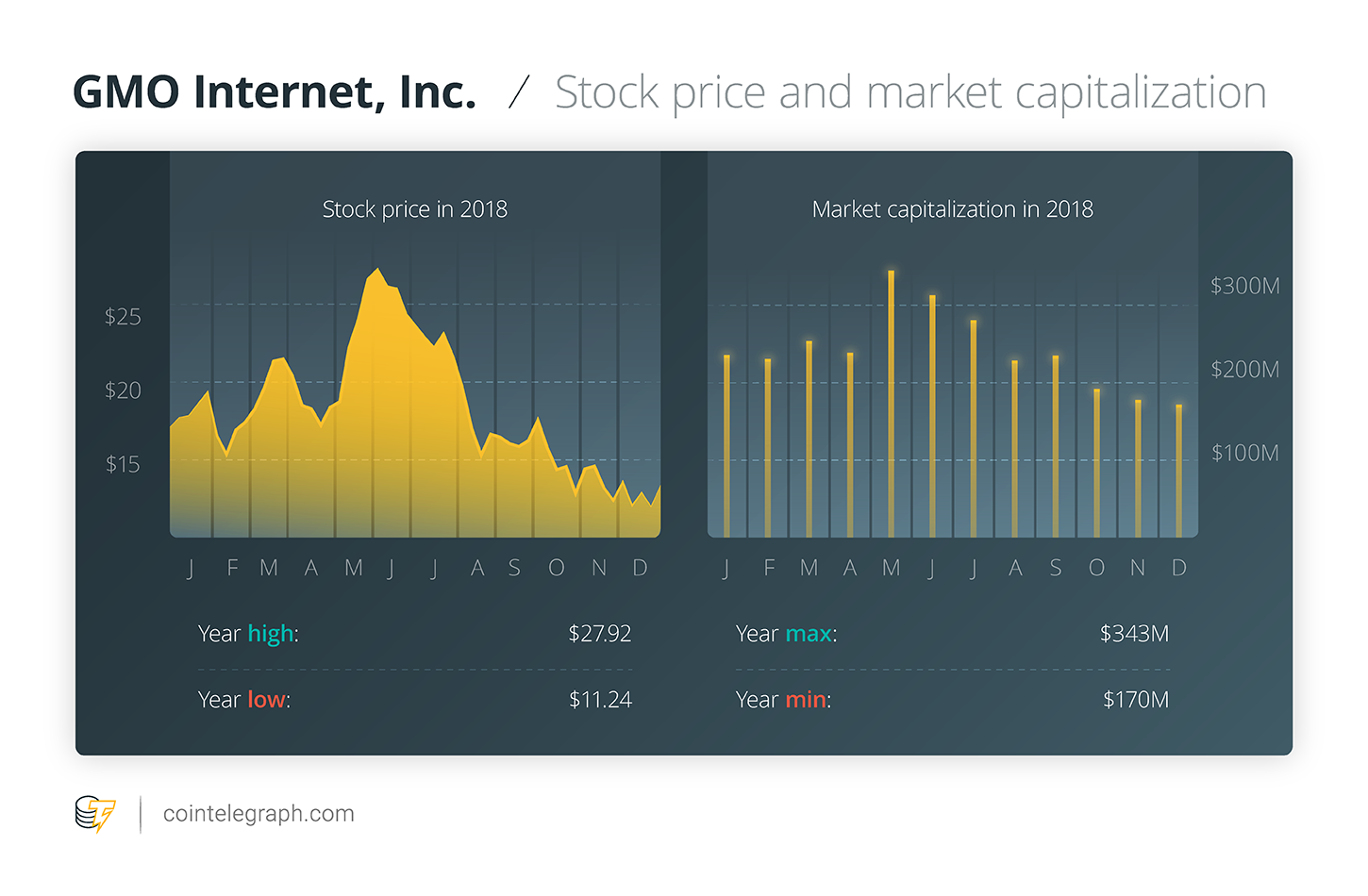 In June, the Japanese company allocated around 10 percent of the firm’s capital and resources to engage in an ambitious mining venture with the vision of competing against Bitmain.

At the time, the company established a dedicated cryptocurrency mining equipment development department to create its own 7-nanometer (nm) ASIC chips to run a large-scale mining facility. The GMO team said in June:

“We will use cutting-edge 7 nm process technology for chips to be used in the mining process, and are currently working on its research and development with our alliance partner having semiconductor design technology to realize high performance computer for mining. It will be possible to reduce power consumption compared to the existing mining machines with the same performance, and achieve a computational performance of 10TH/s [transactions per second] per chip.”

The company, despite its large amount of capital and resources, failed to take the size of the operations of Bitmain into consideration. As early as mid-2017, Bitmain was seeking a valuation of over $15 billion, anticipating a successful initial public offering (IPO) in Hong Kong.

Currently, GMO is valued at just over 169 billion yen, equivalent to around $1.5 billion. That is, a mere 10 percent of Bitmain’s valuation earlier this year.

Initially, GMO was convinced that, as a major internet conglomerate in Asia, it could outpace Bitmain and secure a big portion of the market share of the cryptocurrency mining industry. However, as a report by BitMEX would later reveal, Bitmain was ready for such competition and was willing to operate at a loss to squeeze out its competition.

On Christmas Day, Dec. 25, GMO called off its mining operation, absorbing the $320 million loss and halting the development, manufacturing and sales of its mining equipment immediately. A public document released by GMO read:

“After taking into consideration changes in the current business environment, the Company expects that it is difficult to recover the cryptocurrency-mining-business-related assets through selling mining machines, so the Company has decided to stop the development, manufacture, and sales of mining machines, thereby recording an extraordinary loss. GMO Internet will record losses from the transfer of receivables of approximately JPY 17.5 billion and allowance for doubtful accounts of approximately JPY 3.5 billion, recording an extraordinary loss of approximately JPY 24.0 billion in total on the consolidated accounts and the individual accounts.”

The main competition of GMO was Bitmain, and GMO set out to outcompete the China-based cryptocurrency mining equipment manufacturer since its inception.

But, according to a report released by BitMEX Research, Bitmain sold many of its S9 miners, its flagship product, at a loss throughout the year, in a likely attempt to establish its dominance over the sector by engaging in a price war with its competition, which it knew other companies in the space could not handle.

In August, when the report of BitMEX Research was released, the price of Bitcoin was still hovering at around $7,000, above the breakeven cost of mining. As such, by the end of the third quarter of 2018, miners in the cryptocurrency space were still making profits and Bitmain was able to sell its Antminer S9 to mining facilities across the world.

Due to relatively high demand for mining, at the time, Bitmain could handle losses at the cost of creating a more inefficient environment for its competitors. But, as months passed by and a full-blown bear market hit in November, as the price of Bitcoin fell below the breakeven cost of mining at $6,900, Bitmain also started to struggle.

A paper by BitMEX Research released on Aug. 30 read:

“This analysis implies Bitmain are currently loss-making, with a negative profit margin of 11.6% for the main S9 product and a margin of over negative 100% on the L3 product. In reality costs are likely to have declined so the situation may not be as bad, however we think it is likely Bitmain are currently making significant losses. These low prices are likely to be a deliberate strategy by Bitmain, to squeeze out their competition by causing them to experience lower sales and therefore financial difficulties.”

Following a poor three-month period from September to December, Bitmain reportedly laid off 50 percent of its workforce. On MaiMai, a Chinese social media platform, one Bitmain employee confirmed that more than 50 percent “of the entire Bitmain’s headcount” has started to be let go.

The Bitmain staff member also added that some departments “have to be let go entirely” due to market conditions.

The priority of the layoff is expected to be newly established departments that work outside of the core scope and business model of Bitmain, such as artificial intelligence (AI).

The problem with Bitmain and other companies’ wide approach

In May, Bitmain released a statement that was not expected by the cryptocurrency community, disclosing the company’s long-term plans to compete against Nvidia, Intel and AMD — companies valued at over $100 billion — in the area of AI.

Confident in the sustainability of the cryptocurrency mining industry, Bitmain started to enter entirely new industries to go against some of the largest technology companies in the world.

In a series of interviews with Bloomberg Businessweek, Bitmain co-founder Jihan Wu said that AI chips are similar to Bitcoin mining chips in the sense that AI requires “lots of computations” and Bitcoin mining requires application-specific integrated circuit (ASIC) chips, which are applicable in AI. Essentially, the plan of Bitmain was to create chips using its existing chip designs to power AI systems and software.

The problem Bitmain and most companies in the cryptocurrency had in the first few quarters of 2018 was the aggressive diversification of services and products, often expanding outside of cryptocurrencies, without making necessary improvements in their core products and business models.

ConsenSys, for instance, the biggest blockchain software studio in the world, based in New York, laid off over 300 employees from its workforce to focus on a select group of products it can push to the mainstream to acquire active users.

Many companies in the cryptocurrency space, including the mining sector, have expanded their businesses to different sectors by moving out of the scope of mining and mining equipment manufacturing, and the overly aggressive approach failed as market conditions worsened in the third and fourth quarter of 2018. 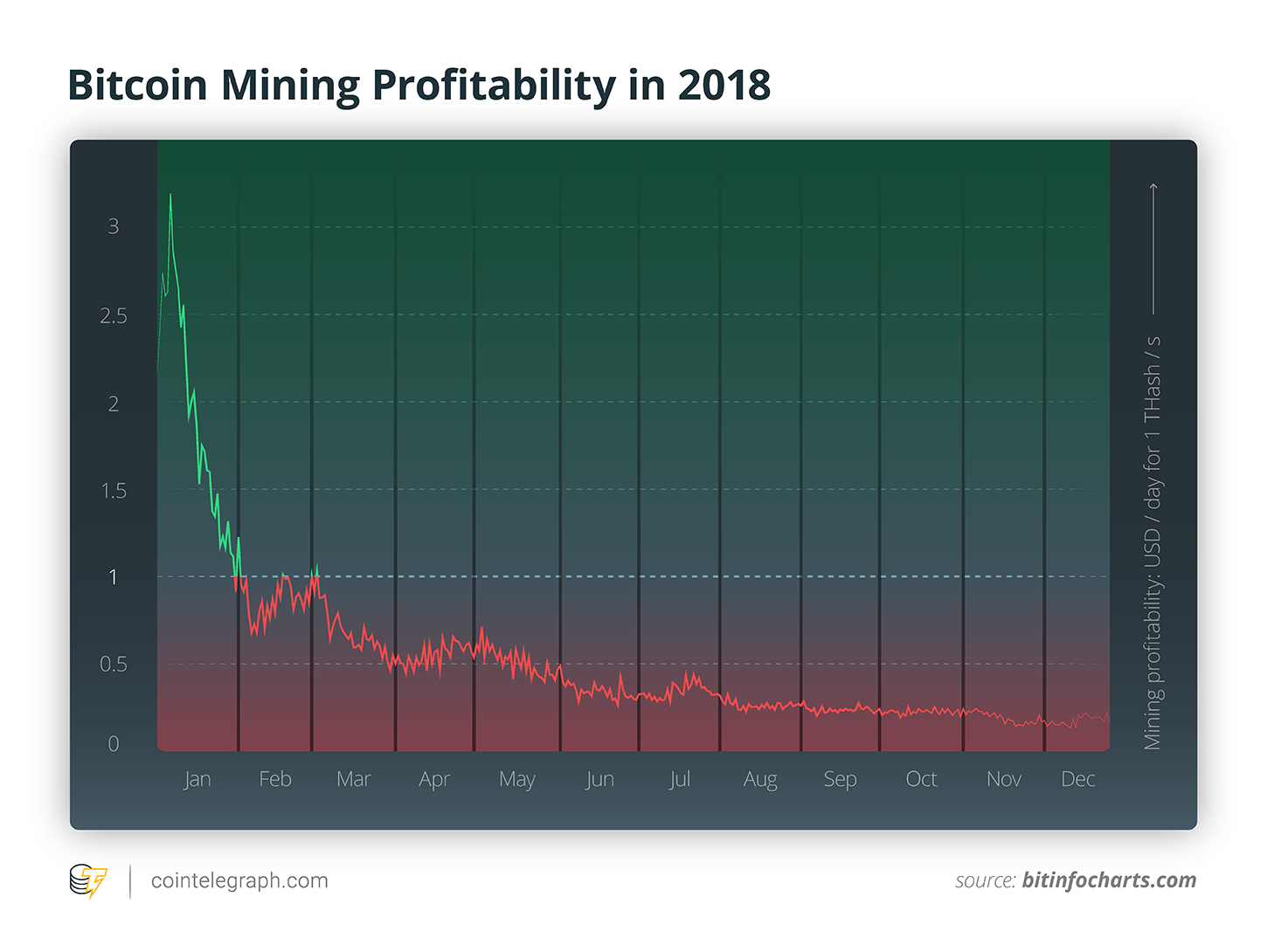 According to cryptocurrency market data provider and wallet platform Blockchain, the hash rate of Bitcoin — or the level of computing power that supports the Bitcoin network — has declined from 61 exahash to 44 exahash, from August to December.

On Dec. 3, Malachi Salcido, the head of Salcido Enterprises, one of the largest mining facilities in the U.S., said that miners had left the market en masse. The executive emphasized that the price of cryptocurrencies would have to increase by large margins for mining to be profitable, but said that smart money is watching for the trend to reverse.

“I expect where we are at to possibly get a little worse before it gets better. Like all market bottoms, smart money is watching for the turn, that doesn’t happen usually quickly. It wouldn’t surprise me if the bottom is finally in February,” Salcido said, following the release of a paper by Fundstrat that revealed that at least 100,000 individual miners have exited the space.

The recovery in the hash power of the Bitcoin network in December and the relatively high computing power of the cryptocurrency likely comes from large-scale facilities that are continuing to mine the digital asset.

Although individual miners relying on cloud mining platforms and small ASIC mining rigs are able to exit the space with a small loss, it is difficult for mining centers that have acquired long-term contracts from electric grid operators and purchased large amounts of ASIC miners to bring their operations to a halt.

“Part of the reason that’s [i.e., the death spiral of crypto] unlikely to happen is that miners have a much more long-term perspective. Meaning that, they have existing investments in equipment and they usually purchase electricity on long-term plans, they don’t pay it by the week. And therefore, if they have to wait to become profitable another three months and they have the equipment in place, they’re not turning it off.”

Large conglomerates such as Intel, the $213 billion technology conglomerate, are currently working on the development of efficient mining systems, which may improve the productivity of mining chips and equipment.

A patent Intel acquired for SHA-256 datapath for energy-efficient high-performance Bitcoin mining demonstrates a piece of hardware that is capable of being accelerated for the sole purpose of mining cryptocurrencies.

Samsung, South Korea’s biggest corporation by market valuation, is also currently using its foundry in its headquarters based in Suwon, South Korea to produce cryptocurrency mining equipment and chips.

Previously, due to the partnership between Bitmain and TSMC, a Taiwanese chip maker, the vast majority of chips were manufactured by the two companies, leading the market to be dominated by two firms.

Large-scale mining facilities are expected to continue their operations even through losses because of their long-term strategies.

It remains uncertain which factors could trigger crypto assets to recover in value over the next 12 months but with major cuts in their workforce and realignment of vision, having generated billions of dollars in profit from 2017 to 2018, companies like Bitmain have the capital to sustain their operations.

As such, although the majority of individual miners have exited the space, analysts expect major mining facilities to remain in the space and wait out the bear market of crypto assets, given that once the valuation of the cryptocurrency market recovers, miners will be able to begin recording profits once again.