Saturday, Dec. 29 — all of the top 20 cryptocurrencies are seeing moderate to substantial gains, with Bitcoin’s (BTC) price going above $3,900 again, according to Coin360 data. 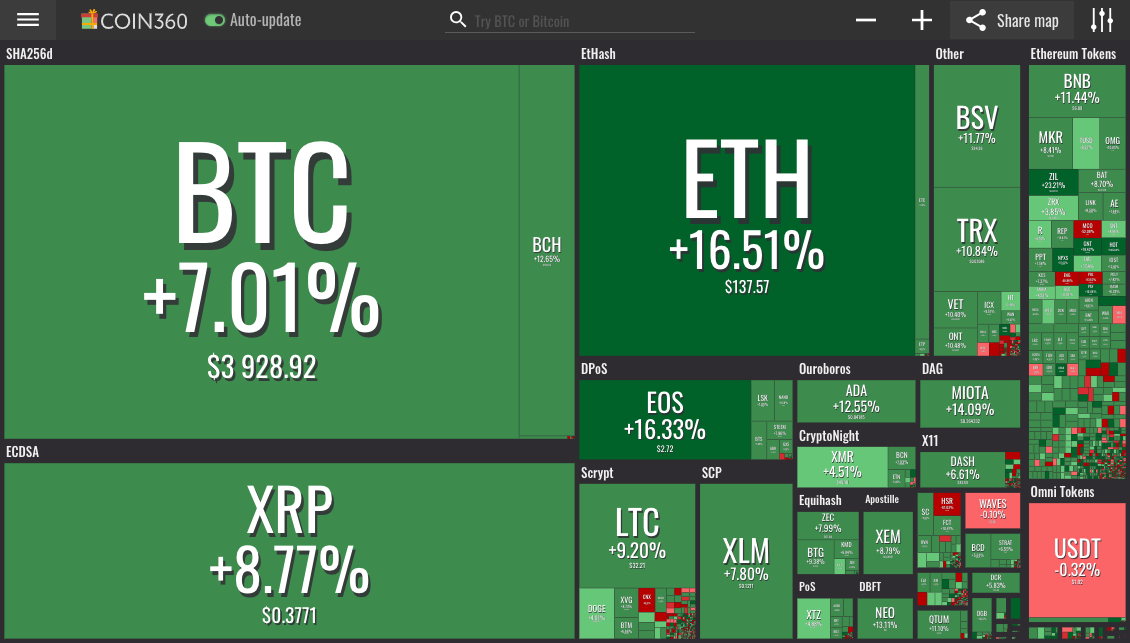 At press time, Bitcoin is up over six percent on the day, trading at around $3,926. Looking at its weekly chart, the current price is substantially lower than Monday’s high of $4,265, but the cryptocurrency is still trading significantly up from $3,642 — the mid-week low registered yesterday. The current price is also near $3,963, where Bitcoin started the week.

Ripple (XRP) — the second largest cryptocurrency by market capitalization — has gained over 8 percent on the day, trading at about $0.376 as of press time.

Ethereum (ETH) remains the third largest cryptocurrency by market cap, seeing nearly a 15 percent value increase over the last 24 hours. At press time, ETH is trading at around $137, having started the day at $119.

On the weekly chart, the current price is higher than $112, which was the value of ETH on last Saturday, but also lower than the Monday high of $157.

The combined market capitalization of all cryptocurrencies has surged to over $131 billion at press time. This places the current market cap higher than the week’s starting point of $129 billion, but also notably lower than the mid-week high of $146 billion.

As Cointelegraph recently reported, Anthony Pompliano, the Morgan Creek Digital Assets founder, declared that Bitcoin still has lower to go. There have also been recent reports that Wall Street giants are postponing their plans to enter the crypto industry because of the recent price plunge.