Strong earnings reports were supportive of U.S. equities as Amazon saw revenue rise at its highest growth rate in more than six years, while net income doubled. Its stock jumped to a new record high on the news. Other tech leaders such as Microsoft and Intel reported strong earnings, but their stocks backed off following initial breakouts to new record highs. The S&P 500 however ended flat, down by only 0.01% for the week.

Rising interest rates remain a concern globally as U.S. Treasury 10-year yields briefly nudged above 3.0% on Wednesday, a key level watched by many market participants, before ending the week at 2.96%. Meanwhile, inflation pressure remains with the U.S. Labor Department reporting that wages and salaries rose at their fastest pace in 11 years.

U.K’s FTSE was the top performer, up 1.82%, for its fifth consecutive week of gains and highest weekly close since late-January.

The historic summit between North and South Korean leaders eased geopolitical tensions, but there is further progress to be made, and markets will be watching new developments closely. Japan’s Nikkei Index advanced by 1.38% to end at its highest weekly close in 12 weeks.

Chinese stocks are expected to underperform due to the threat of expanding U.S. tariffs on Chinese goods. Trade talks between the two countries continue next week in Beijing. China’s Shanghai Composite was up 0.35% for the week while Hong Kong’s Hang Seng dropped by 0.45%.

India’s BSE 30 Sensex: Equities could soon run out of steam 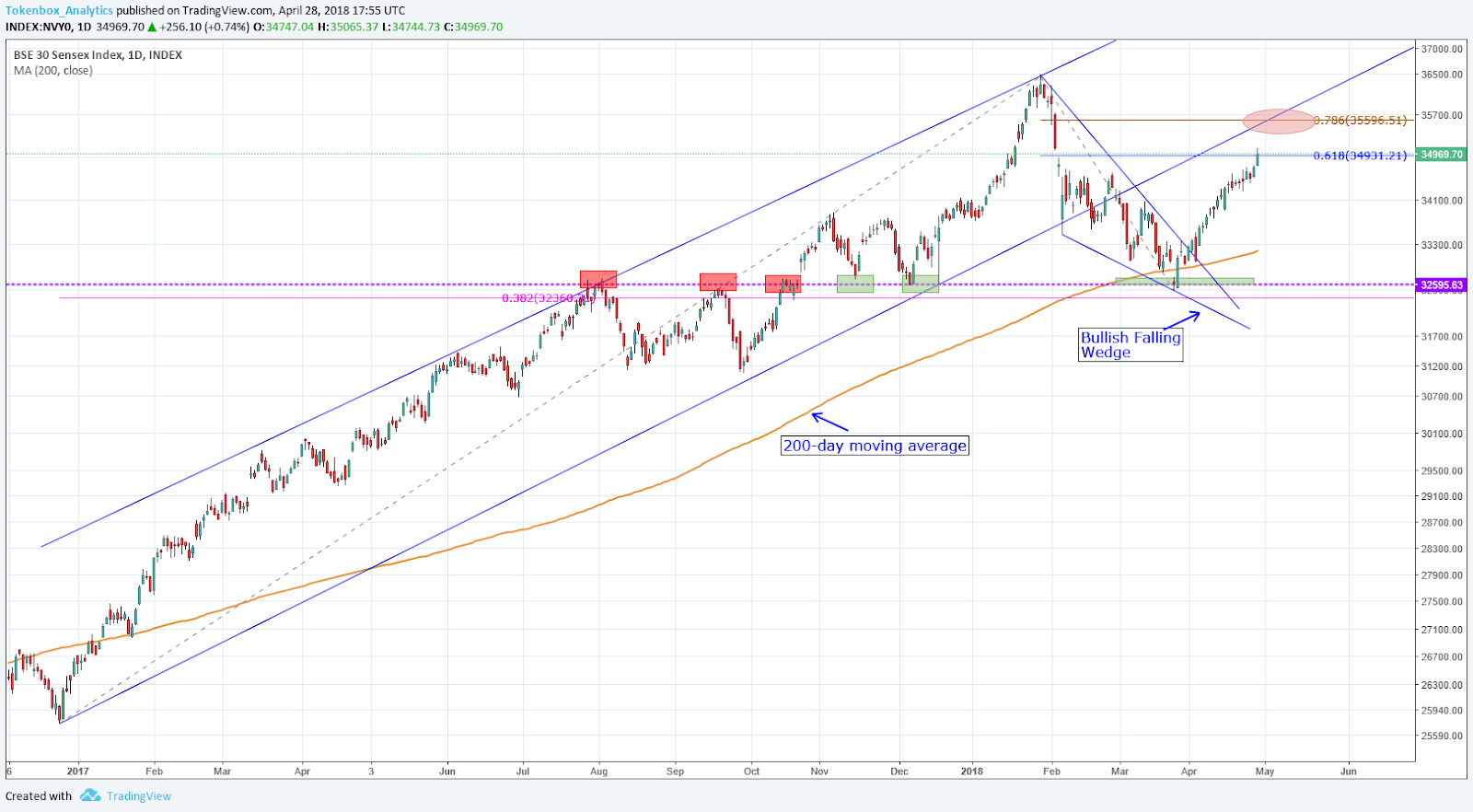 Last week’s 1.61% gain included the completion of a 61.8% Fibonacci retracement at 34,931.21, and the index remains strong. This would seem to support the idea that the index can keep rising at least to the next potential resistance zone. That price zone, which is identified with a red oval on the enclosed chart, is seen as the bottom of the lower rising trend line and the completion of the 78.5% Fibonacci level, which is at 35,596.51.

The FTSE also broke out of a bullish falling wedge a month ago and has been rapidly rising ever since, in addition to closing strong each week. It’s come up 9.32% as of last week’s 7,507.10 high. Last week the FTSE topped its competitors with a 1.82% gain as it reached and exceeded the 61.8% Fibonacci retracement level (7,439.0) and ended the week back above its long-term uptrend line for the first time in 12 weeks. In addition, the FTSE is back above its 200-day moving average (brown line). 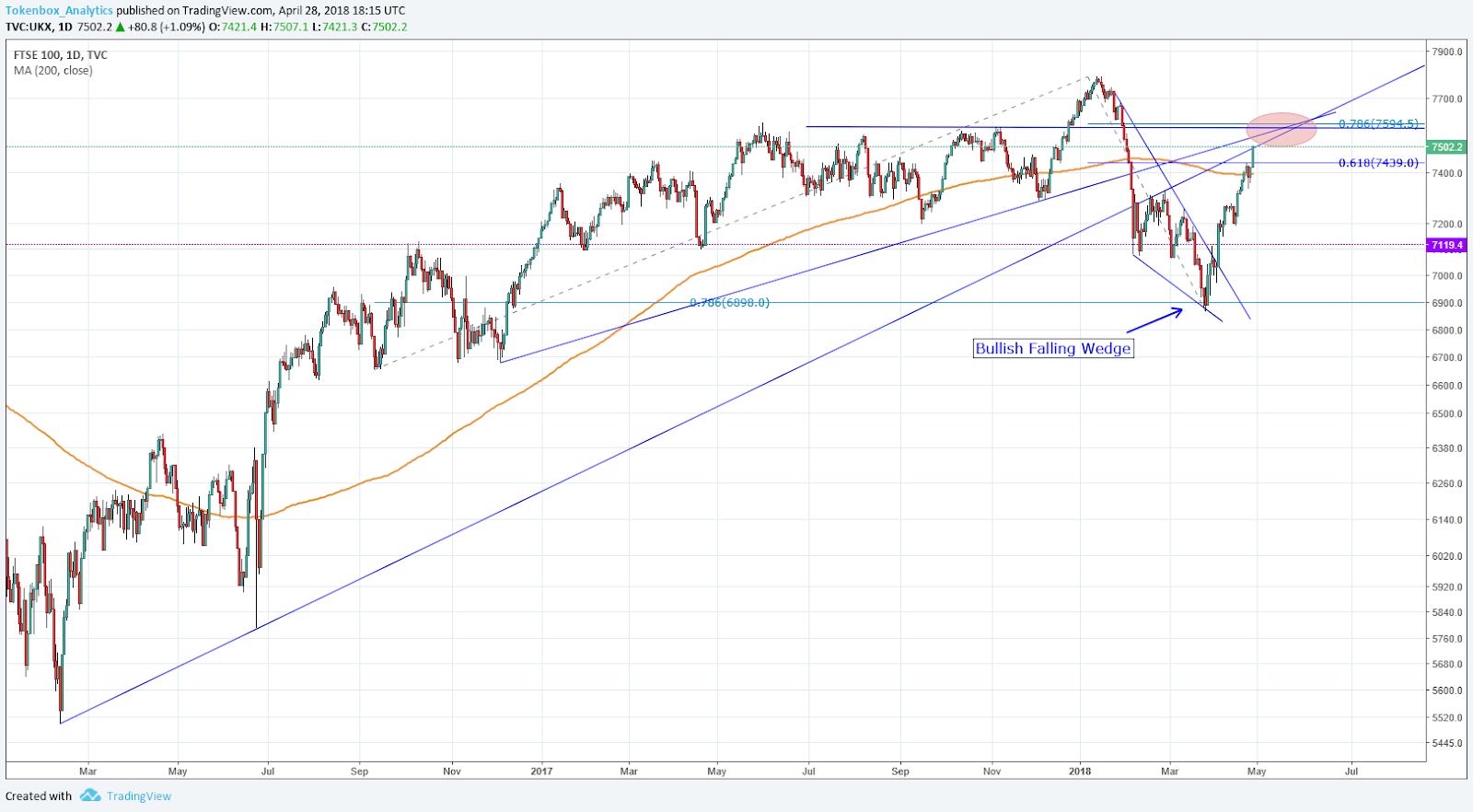 At the same time, the index now faces a resistance zone going up to the 78.6% Fibonacci retracement level at 7,594.5. That potential resistance zone is around prior multi-month resistance from 2017 and where two rising trend lines converge.

The performance in the eight cryptocurrencies shown in the accompanying table was mixed last week, with Bitcoin Cash leading the way, up 18.2%, and Ripple taking up the backside, with a 12.9% decline. Overall though, digital currencies continue to recover and are in the early stages of potential uptrends since rallying off bottoms from four weeks ago. Further signs of strength are needed over the coming weeks as the trend structure organizes and pullbacks get completed.

Keep in mind that once breaking through a clear resistance zone (trend line, for example) markets will eventually retrace the prior advance to some degree before the trend is ready to proceed. So far, the retracements of the recent strong advance have been mild. This means there could easily be further and deeper retracements before the uptrends are ready to resume. It would be healthy and normal for this to occur. If, however, the rallies occur sooner with breakouts above prior trend highs, this is a sign of strength, but it also increases the odds that price will get ahead of itself and a more chaotic retracement/correction could eventually follow.

Looking to the following week, there is some concern that downward pressure could prevail if the so-called ‘Tokyo Whale’ dumps Bitcoin into the market from the shuttered Mt Gox exchange. There is an estimated $170 million or more of Bitcoin that’s been moved out of the wallet and ready for sale. No one knows what’s actually going on in this regard but the perception of a big seller lurking could hamper investor sentiment and therefore dampen buyer enthusiasm.

Last week the XRP/USD pair advanced off its $0.45 bottom from a month ago stalled right at the 61.8% Fibonacci retracement zone of the internal downtrend. The high for the week and the uptrend was $0.964, for a 105.9% gain in less than five weeks. So far the pullback has been mild with support found where the 38.2% Fibonacci retracement level and 200-day moving average come together. Up until two weeks ago, Ripple had been below its 200-day line. If it can make a decisive move above last week’s high the February swing high resistance zone, first around the 78.5% Fibonacci line of $1.06, and then the swing high around $1.23, are the next targets. A rally above that swing high will provide a more definitive bullish signal for the long-term recovery of the recent correction.

A drop below last week’s 0.758 support leads to a deeper correction where Fibonacci levels, as seen on the accompanying chart, can be used to gauge potential support zones.

Bitcoin Cash shows similar relative strength in that it moved above its 200-day line (brown) last week and has recognized it as support since. Leading the way, the BCH/USD pair had one of the strongest moves off the bottom, rising 162.3% as of last week’s high of $1,573 in four weeks.

If the recent low of $1,228.90 is broken to the downside, then it should target the 50% retracement at 1,086.3 next, followed by the 61.8% retracement at $971.40. A move above last week’s high and then the $1,636.8 swing high from February is the next key sign of strength pointing a likely continuation of the upside move over the intermediate-term. Keep in mind that nothing goes straight up, and pullbacks and consolidation periods are normal and healthy for the evolution of a trend.