Last week, the relatively low volatility in the cryptocurrency market came to an end. Just about all cryptocurrencies dumped together with sharp declines, triggering renewed fear among traders and investors. As always, a bottom – at least temporarily – was eventually found, leading to bounces across the board.

On the other hand, global equity markets were relatively stable and mostly holding above the support, following sharp drops in previous weeks. In most cases, major stock markets continue to evolve a potential bottom other than India, which as of last week has fallen through key support levels.

The German DAX Index and S&P 500 led the way with gains of 3.63 percent and 3.54 percent respectively. At the start of the week, the DAX fell to a new trend low of 11,831.0 before seeing support, around the long-term uptrend line and prior swing low from August. It quickly reversed intraday to close at the high of the day. Nevertheless, it remains in a downtrend following a breakdown from a bear flag trend continuation signal two weeks ago.

The UK FTSE Index and Shanghai Composite saw modest gains of 2.19 percent to 7,224.50 and 1.62 percent to 3,307.17, respectively. The trendline resistance remains above the FTSE, and it has been tested several times in recent weeks and stopped an advance. This puts the index at risk of falling below last week’s low of 7,062.10. At the same time, a potential bullish double bottom has formed. However, it is not confirmed unless there is a rally above the two-week high at 7,326.

Since falling from the January peak of 33,484.1 Hong Kong’s Hang Seng Index has found support twice around the long-term uptrend line and it continues to hold. Last weeks low of 29,852.40 was the second time that the index bounced off the support area around the line. This tells us to keep an eye on the line going forward for signs of a change in the relationship between the price and the line. In addition, notice that the brown 100-day moving average (MA) support line on the enclosed chart has been parallel to the trend line for a year. The 100-day MA is currently at 30,081.39.

The Hang Seng’s most likely next upside target looks to be around 32,522.1/32,552.1. That’s where an ABCD pattern completes, and the 78.6 percent Fibonacci retracement is hit, respectively. India’s BSE 30 Sensex Index barely got a bounce following the decline to support of the 100-day MA (brown line) and 78.6 percent Fibonacci retracement area in February. Once finding support the Sensex formed a relatively narrow range rectangle consolidation pattern around support of the MA and both above and below the long-term uptrend line, until last week. That’s when the index broke down from the rectangle pattern and below the 100-day MA. Last week the Sensex was the worst performer of the seven equity indices followed, falling by 739.80 or 2.17 percent to close at 33,307.14. Just below last week’s low of 32,991.14 is the next key support zone around 32,737 to 32,360, consisting of the 200-day MA and prior support and resistance levels, respectively. Note that a break below the 32,565 swing low from December will violate the uptrend price structure and therefore likely leads to a much deeper correction.

Last week’s low completed an 88.6 percent Fibonacci retracement of the prior uptrend. If the last week’s high of 34,060.13 can be exceeded to the upside, then the Sensex might have a chance of bouncing higher. Until a breakout above last week’s high downward pressure remains dominant.

Cryptocurrency enthusiasts had their world rocked once again last week with most coins dropping precipitously within a relatively short period of time. There was a confluence of factors that may have contributed to the wave of selling including: Although the news seems to have played some part in spooking the market, in almost all cases the charts were already bearish, pointing to lower prices. The news may have just accelerated the speed in the direction the price was already heading. For those nimble and able to sell short, some nice opportunities presented themselves.

Although falling $0.07 or 8.4 percent to end at $0.82, Ripple tumbled the least out of the eight cryptos. Earlier in the week, Coinbase killed rumors that it would be adding Ripple to its platform. XRP remains in a downtrend but above its 200-day MA, whereas a number of other major cryptos are below their 200-day MAs. Following just behind Ripple is Litecoin with a 12.8 percent decline. Litecoin fell $27.28 to close at $186.04 and is flirting with the resistance of its 50-day line. Until last week’s decline, it had held above support of the 50-day for the prior couple of weeks.

Ethereum: bounces off solid support, but will it continue to hold?

Ethereum ended down $129.89 or 15.2 percent last week to close at $724.61. It remains in a clear downtrend on a daily basis and is below the 50-day line which continues to fall, but above the 200-day MA, which is still rising. Last week’s low was at $637.73, right around the confluence of both the 78.6 percent Fibonacci retracement and the 127.2 percent Fibonacci projection. The projection also completed an ABCD pattern or measured move where the second leg down off the swing high at point A was around 127.2 percent of the price change in the first leg down.

The key resistance to watch is the nearby downtrend line. The ETH/USD pair would need to close above that line on a daily basis before there some sign that the bounce off last week’s bottom at D may continue. If the price falls further below last week’s low then next watch for support around the confluence of several Fibonacci price levels around $612.67. After that, there is a price zone from approximately $587.07 (200-day MA) to the most recent swing low of $565.54.

IOTA has been falling in a well-defined downtrend since the peak at $5.80 in December. Not only it was the weakest performer last week but it is also the worst performer so far in 2018, down 60.6 percent. As of last week, it takes a unique position technically as it is the only crypto out of the eight followed that fell below its prior swing low from February. This is a sign of relative weakness when compared to the other seven cryptocurrencies on our list. The low from February was at $1.20, and last week the IOTA/USD pair dropped to $1.136 before reversing higher. Further, the cryptocurrency is now clearly back below its 200-day MA (purple line) as of last week’s drop, after being above it for most of the past several weeks. 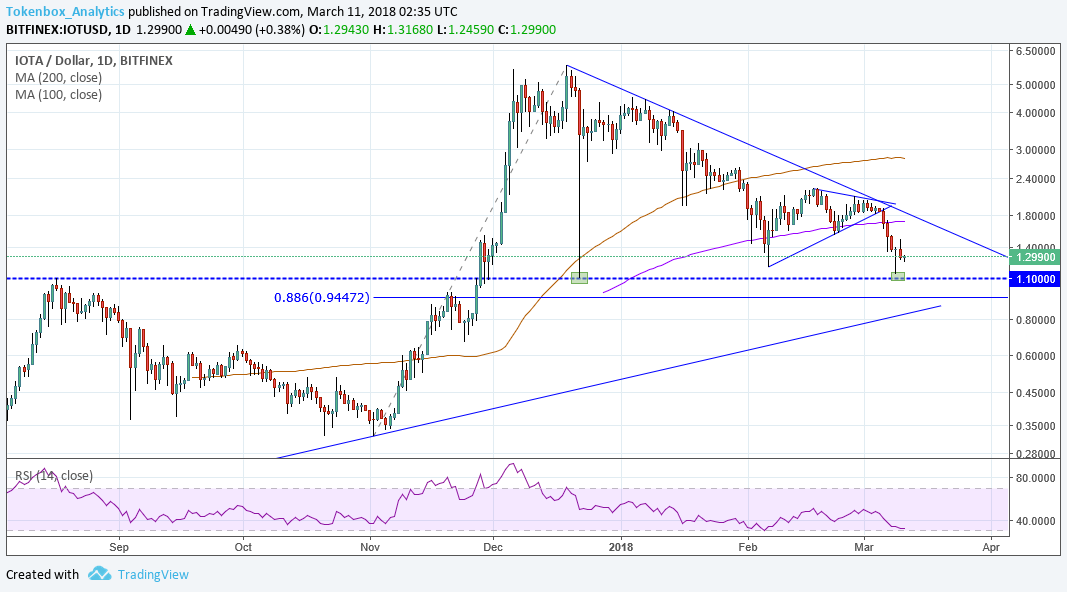 Resistance at the 200-day MA is now at 1.71, with the downtrend line not far away. If you look at the brown falling 50-day line on the enclosed chart, you can see it has been following the downtrend line for the past couple of months. This means that a bullish breakout of the line must also quickly be followed by a breakout above the MA, which is now at $1.965. Until then the downtrend continues.