The cryptocurrency market data is provided by the HitBTC exchange.

Global equity markets were hammered last week across the board as inflation fears and concern over higher interest rates intensified with bond yield rise. Each of the seven indices tracked below was down for the week (January 29 – February 4).

Harder hit was the German market, with the DAX down 4.2% for the week to close at 12,785, its worse week in almost two years. Bearish sentiment was partly driven by higher yields on German bunds, which rose to two-year highs, while Deutsche Bank losses were reported to be higher than anticipated by the market.

Japan’s Nikkei was the strongest performer, down 1.5% to end at 23,632. The Bank of Japan intervened in the market to halt rising bond yields. Japan was followed by Hong Kong’s Hang Seng Index, which dropped by 1.7% to end at 32,602. The Hang Seng remains a top performance year-to-date for a 9.0% gain. 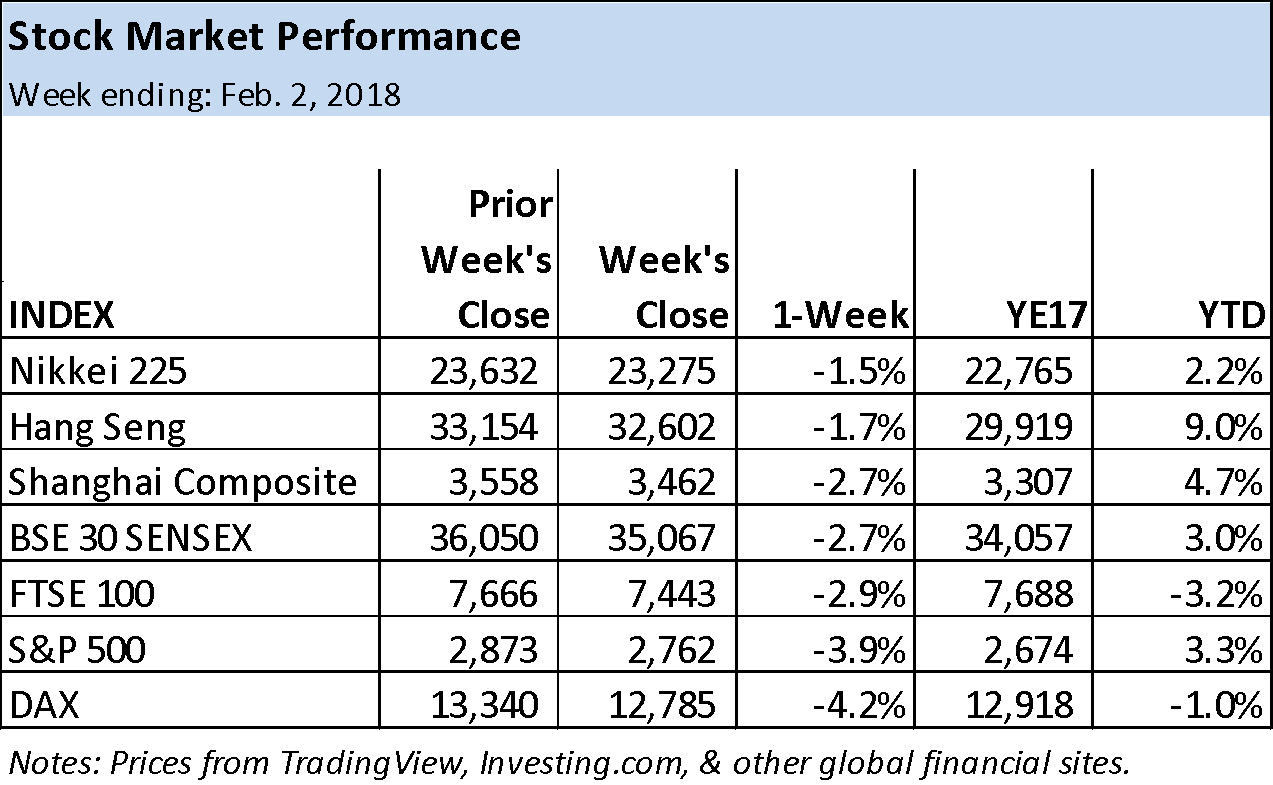 The first potential support zone is around the top of a six-week consolidation range around 33,865, followed by a lower previous support and resistance zone from approximately 32,686 to 32,565. 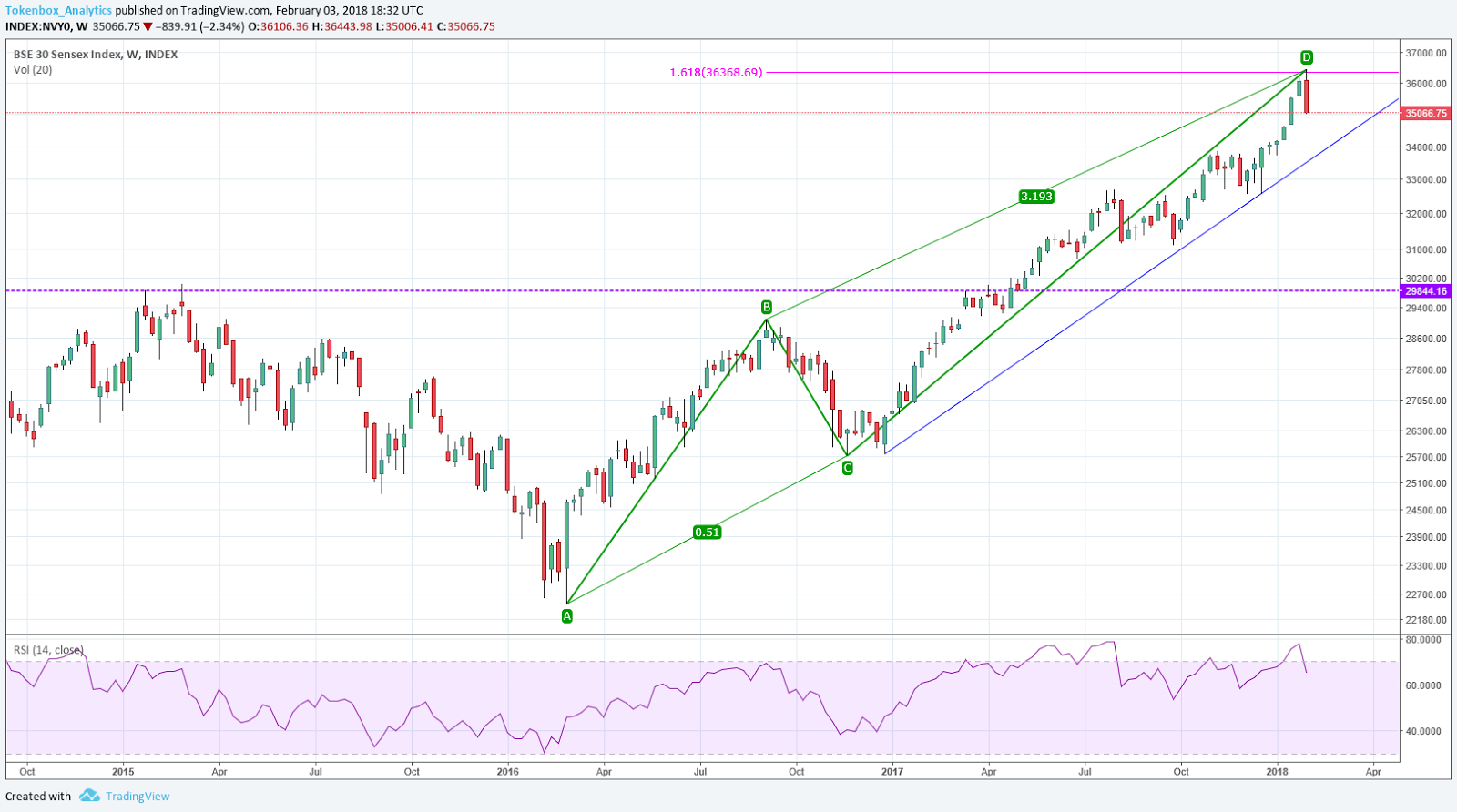 The Hang Seng Index has had a nice run recently, rising as much as 19% off the early-December low in eight weeks, as of last week’s 33,484.1 high. Last week the index was down for the first time during the eight-week run, falling 1.7% to close at 2,601.8, and pointing to a likely change in the pattern of consecutive up weeks. 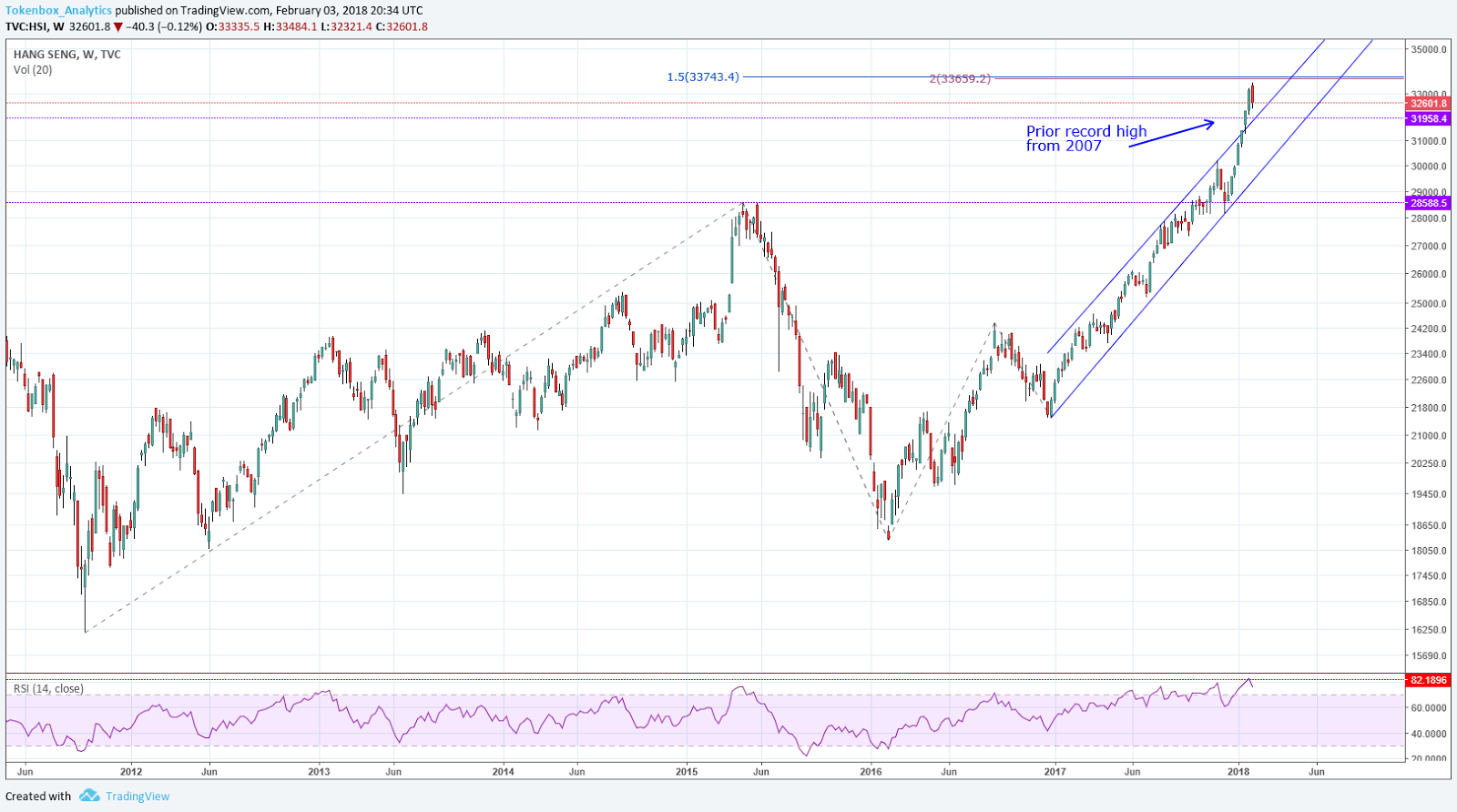 In the bigger picture, the Hang Seng is going strong, having broken out above the 2007 high of 31,958.4 three weeks ago. At the same time, it broke out of the top of a multi-month rising trend channel. Each is a sign of strength. Nevertheless, in the near-term, it looks like it’s heading for a rest, even if it doesn’t last long. First, is the change in the pattern of consecutive positive weeks of performance, and then there is the 14-week Relative Strength Index (RSI). This momentum indicator was the most overbought since the prior record top in 2007, reaching a high of 82.75 two weeks ago. Further, just shy of the recent top is the confluence of two harmonic ratios, derived from prior swings.

Cryptocurrencies: Down across the board

Cryptocurrencies had a tough week, as most have since the start of the year. Out of 211 cryptocurrencies, only four were positive for the week, while the eight cryptos tracked below declined from a little over 10% to more than 26%.

Bearish sentiment was driven by a number of factors including:

Nevertheless, a number of coins had classic bullish hammer candles formed on Friday, February 2, with further strength seen by Saturday, February 3, as price moved above the Friday highs. The hammer is a one-day reversal pattern that is most reliable following a sharp and protracted decline, as we’ve seen recently with most of the cryptos.

As mentioned last week in this column, Ethereum was showing relative strength two weeks ago against the other cryptocurrencies in the table. That relative strength carried over into last week as the decline in ETH was almost half of the others. It declined the least, down 11.8%. The next worst performer was Bitcoin, falling 20.3%, followed closely by IOTA with a drop of 23.5% and then Dash, which declined by 23.9%. Although Dash (DASH/USD) briefly broke below is rising long-term trend line last week it quickly recovered to form a bullish hammer candle pattern. Bullish confirmation was indicated Saturday as the cryptocurrency moved above the high of the hammer. At the $430.0 low it was the most oversold, it’s been in over a year according to the 14-day RSI. Bitcoin Cash (BCH/USD) also had a bullish hammer candle form on Friday and an upside breakout on Saturday. Support was seen around prior support and resistance levels with a low of approximately $940.9. The odds now favor a continuation higher. Still, this doesn’t mean BCH goes straight up. Short-term weakness should be watched for potential entries at lower prices as it further develops its bottom, if the cryptocurrency is to do so. A decisive move above the internal falling trend line increases the chance for higher prices. Nevertheless, we should be cautious, given the recent volatility and because a break above a trend line by itself is not reliable without additional confirmation.